BALI (REUTERS) - As Mount Agung continues to spew menacing smoke over the Indonesian Island of Bali, those on the ground fear the volcano could blow at any time.

More than 75,000 people have now been evacuated from the “danger zone” as strong tremors rumble underground.

“The seismic activity of Mount Agung is still high and its status remains at a “dangerous” level,” Official of Volcanology and Geological Disaster Mitigation (pvmbg) Agency, Agus Solihin said.

Indonesian President Joko Widodo has met with evacuees seeking shelter in makeshift camps, like town halls and school gyms, where communities are providing food and water. 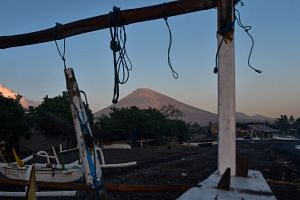 The president urged residents to follow official instructions after reports some were reluctant to leave their homes.

Meanwhile, several other countries including Australia and the US have been issuing travel warnings alerting holidaymakers to the risk.

Indonesia sits on the so-called Pacific Ring of Fire and has nearly 130 active volcanos - more than any other country.

Mount Agung’s latest rumbles are a spine-chilling reminder for some locals - it erupted around 50 years ago killing more than one thousand people.