JAKARTA (THE JAKARTA POST/ASIA NEWS NETWORK) - Don't be afraid, officials in the popular resort island of Bali have assured tourists and visitors.

His comments came after two small earthquakes jolted Bali on Monday evening, sending villagers living on the slopes of Mount Agung out of their homes. The alert level for Mount Agung, which last erupted in 1963, was raised and its surrounding no-go zone widened following the quakes.

Villager Wayan Warsa, his wife and two young daughters quickly fled their house when the tremors hit on Monday night.

"We thought Mount Agung had erupted. So we ran to my brother's house. I even forgot we had a motorbike. We just ran quickly," the 33-year-old said on Tuesday.

Warsa is a resident of Sebudi village on the slopes of Mount Agung. The mountain is in Bali's Karangasem district, which has a population of 408,000.

Warsa's village is among those which lie within the risk zone. His brother lives only 500 meters away from the mountain.

"We were monitoring the mountain and we were sure that it did not erupt. Apparently, we just panicked," Warsa said.

They returned to the village on Tuesday (Sept 19) morning after local officials assured them it was safe to remain in their homes.

The BNPB on Monday night raised the alert level for Mount Agung volcano, Bali's tallest peak, to the "advisory" status, which means a volcano is showing signs of elevated unrest. Local officials have been ordered to draw up contingency plans and villagers living in the vicinity have been told to prepare for possible evacuation.

The National Disaster Mitigation Agency also more than doubled the size of a no-go zone around the volcano, urging villagers and visitors to stay 6 km away from the crater, and up to 7.5 km away to the north, southeast and south-southwest. 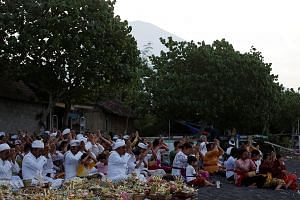 "Do not be afraid. Tourist activities remained safe and the Ngurah Rai International Airport is far away, " Mr Sutopo told The Jakarta Post on Tuesday.

The distance between Karangasem and Denpasar, the province's capital, is around 65 km.

"Remain calm and don't panic, but always be ready," Karangasem Regent I Gusti Ayu Mas Sumantri said in an announcement.

Monday night's earthquake, one of which measured magnitude 2.8 on the Richter scale, marked an increase in seismic activity of the volcano.

Following the earthquake, the National Disaster Mitigation Agency (BNPB) raised the alert level of Mount Agung to "advisory" and warned people to vacate areas within a 6-km radius of the mountain's crater.

The volcano last erupted in 1963, damaging nearby villages and resulted in an estimated 1,100 deaths. It is still an active volcano to date, with the crater occasionally belching smoke and ash.

The Volcanology and Geological Disaster Mitigation Center (PVMBG) had called on all relevant agencies to take preemptive measures in case of an eruption.

"We have to prepare for all possibilities. We must find ways to prevent deaths," Bali Governor Made Mangku Pastika said after a meeting in Karangasem on Tuesday.

Meanwhile, flights and ferries to and from Lombok in West Nusa Tenggara, a neighbouring region also famous among Bali visitors, have continued to operate .

"Everything seems normal; no drastic change as far as the number of passengers is concerned," said Dheni Nurdiana, spokesman for ferry operator PT ASDP Lembar in West Lombok, adding that the company called for increased vigilance as a precautionary measure.