NEW YORK (NYTimes) - Organisers of a high-profile event to be held during the annual United Nations conclave this week have at the last minute cancelled an award they had planned to give a Malaysian organisation over concerns about its links to the wife of Malaysian Prime Minister Najib Razak, whose family is mired in corruption allegations.

The event, to be held on Thursday (Sept 22) at the Metropolitan Museum of Art, honours people and groups that have fought extremism. It is organised by the Antiquities Coalition Founder and Chairman Deborah Lehr, with the help of six other women co-hosts. It will honour close to a dozen individuals and organisations in different fields from education to protecting cultural heritage.

Among the scheduled honorees was Permata, a Malaysian children's organisation that was founded several years ago under the auspices of Datin Seri Rosmah Mansor.  She is known for her lavish spending on luxury items like Hermes Birkin bags.

The couple's family and close friends are at the centre of a Justice Department lawsuit claiming that US$1 billion (S$1.37 billion) in assets - including a US$30.6 million penthouse at the Time Warner Centre in New York and a US$39 million mansion in the Los Angeles hills - were bought with money stolen from Malaysia's sovereign wealth fund, called 1Malaysia Development Berhad (1MDB). 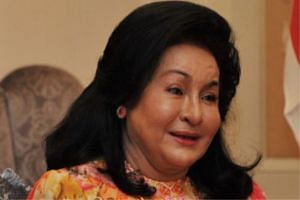 A statement on Sunday from Tudor Parfitt, a scholar involved in the event, confirmed that the honour had been withdrawn.

The statement said that questions had been raised about the sources of Permata's funding, and that although the event organisers were not aware of any specific wrongdoing, they did not have time to vet the organisation.

The event is co-hosted by the head of Unesco, Ms Irina Bokova. As she is running to be secretary-general of the UN , her actions are also being closely scrutinised.

Questions surrounding Malaysia's prime minister and his wife have intensified since the Justice Department lawsuit was filed two months ago.

Mr Najib is believed by some to be the "Malaysian Official 1" mentioned in the documents, and Datin Seri Rosmah is not named in the documents. But her son from a first marriage - Riza Aziz, a movie producer - is named.

Mr Najib has said he broke no laws and took nothing for personal gain.

A spokesman for the prime minister could not be reached for comment, and neither Unesco nor the UN Foundation immediately responded to a request for comment.