MANILA • An Australian nun who angered President Rodrigo Duterte by joining anti-government rallies has left the Philippines after a long battle against her deportation.

Shortly after landing in her home town, she told reporters: "At present, (in) the Philippines, the human rights abuses are just increasing, and it is a reign of tyranny.

"There has been a culture of impunity for a long time, and it is getting worse."

The missionary had been in the Philippines advocating for the poorest for nearly 30 years.

Since April, she had been battling repeated attempts by immigration officials to deport her. Her missionary visa expired while various appeals were being pursued and she was given a temporary tourist visa that expired last Saturday. 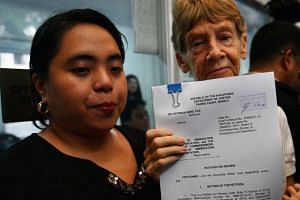 Before she went to the airport, Sister Fox attended an emotional mass to say farewell to hundreds of her supporters who protested against her expulsion and vowed to work for her return, possibly after Mr Duterte steps down in 2022.

Sister Fox herself held out hope she would one day return to the Philippines. "There will come a time I will return," she said.

Mr Duterte's spokesman, Mr Salvador Panelo, said in a text message last Saturday that the nun's expulsion "is a timely reminder to all foreigners who stay or sojourn in this country that they are not entitled to all the rights and privileges granted to the citizens of the Philippines, including the absolute exercise of political rights inherently exclusive to Filipino citizens".

Sister Fox landed in the Philippines in 1990 as a member of the Sisters of Our Lady of Sion, a congregation founded in France in 1847 and famed for harbouring Jews fleeing Nazi persecution in World War II.

A former lawyer who worked with indigent clients in Australia, the nun has said she had been educating landless Filipino farm hands and factory workers about their rights while in the Philippines.