Chinese Foreign Minister Wang Yi reminded reporters gathered in Vientiane this week that the convention centre where Asean ministers were holding their annual meeting was built by his country.

"In 2012, Laos needed a place to hold the Asia-Europe Meeting summit," he said during a press conference on Monday after attending a dialogue with his Asean counterparts. "In 10 months, we built this beautiful building."

The Chinese imprint, already apparent at the start of this year's Asean Foreign Ministers' Meeting, deepened with the launch of the ministers' joint communique: it reiterated serious concern about the escalating South China Sea dispute, but made no mention of a July 12 arbitral tribunal ruling that invalidated China's historical claims over most of the strategic waterway.

Major media outlets were quick to paint the outcome as a Chinese diplomatic victory. China, which has constructed artificial islands on contested reefs in the sea and built up its military presence there, has refused to recognise the ruling.

A few hours after the communique was released, United States Secretary of State John Kerry, Australia's Foreign Minister Julie Bishop and her Japanese counterpart Fumio Kishida tried to make up for Asean's careful stance by issuing their own joint statement stressing respect for the arbitration ruling, which stems from a case initiated by the Philippines. 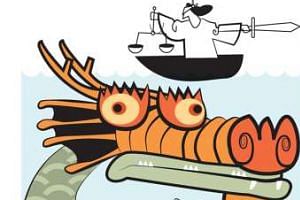 Asia - a community governed by law or power? 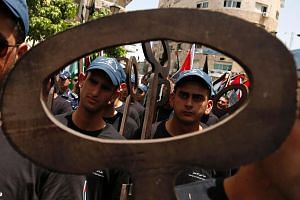 It overshadowed the muted voice of Asean's member states, which had eked out a consensus from a seemingly intractable deadlock.

While some quarters feel that Asean capitulated to Chinese pressure, Ms Phuong Ngyuen, an analyst from the US think-tank Centre for Strategic and International Studies, says Asean "has the right to engage in its own balancing act vis-a-vis China in the aftermath of the South China Sea ruling".

Iseas - Yusof Ishak Institute scholar Tang Siew Mun says the communique is "consistent with Asean's role in managing the South China Sea disputes and not resolving them". "The tribunal is not an Asean initiative," he says. "Asean does not take views on the merits of (claims to) the South China Sea." Plus, "the fact that a joint communique was issued is in itself an achievement for Asean".

The group operates by consensus. Four of its 10 members - the Philippines, Vietnam, Brunei and Malaysia - are claimants in the South China Sea. Two of its poorest states, Cambodia and Laos, are major recipients of Chinese aid and investment. China announced a US$600 million (S$810 million) aid package for Cambodia one week before the summit.

In a rare departure from Asean's backroom diplomacy, Cambodian Premier Hun Sen broke ranks weeks before the summit by publicly announcing his opposition to any Asean declaration supporting the tribunal ruling.

This raised fears that a Cambodian veto over the South China Sea issue might scuttle the statement altogether, like what happened in Phnom Penh in 2012.

"There were calls made back to various capitals before the formulation that you see in paragraph 2 was accepted by everyone," disclosed Singapore Foreign Minister Vivian Balakrishnan on Monday.

This paragraph, which calls for "full respect for legal and diplomatic processes", was positioned at the top of the statement, not in the section on the South China Sea, which started at paragraph 174.

The paragraph also made reference to the United Nations Convention on the Law of the Sea, under the auspices of which the tribunal was held.

While Asean has survived this test intact, its consensus-based system has muted its voice compared with the world powers weighing in loudly on a dispute in its backyard.

Asean secretary-general Le Luong Minh says the bloc is exploring how its charter can be updated. "We are in the process of streamlining the Asean meetings, the Asean processes, to make them more effective and perhaps also facilitate the process of reaching consensus on important issues," he told The Straits Times.

One of the ideas, he says, is to have an "Asean minus X" model, where Asean members can initiate and take part in intra-Asean arrangements, which others may join at a later stage. This option is currently limited only to economic arrangements like a recent agreement between Brunei and Singapore to liberalise trade in telecommunications services.

The answers may take time to arrive at, but in the meantime, questions are being asked about just what will it take to avoid having Asean's credibility put on the line again like this week.