Asean countries are concerned that tensions over the South China Sea may reach a dangerous level and are unsettled by China's installation of weapons systems on islands in the waterway, the Philippines said yesterday.

Foreign Secretary Perfecto Yasay said Asean states "have been unanimous in their expression of concern as to what they see as a militarisation of the region in so far as certain reclamations of certain features in the South China Sea that have been completed".

"They have noticed, very unsettlingly, that China has installed weapons systems in these facilities that they have established, and they have expressed strong concern about this," he told reporters after a two-day foreign ministers' retreat here.

No statement was issued on this, but Mr Yasay, as retreat host, spoke on behalf of the other ministers.

He said the ministers have called for a dialogue to stop "recent developments" from escalating, and hope a code of conduct on maritime disputes will lead to a demilitarisation of the contested waters. 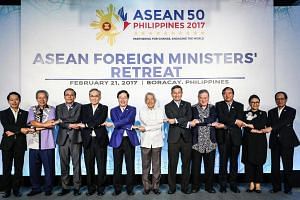 The ministers believe China and the United States will have to work together to ensure peace and stability in the region, he added.

Mr Yasay also said Asean hopes US President Donald Trump can soon unveil a clearer picture of his policies on China and South-east Asia. "We all recognise the fact that American policy under the Trump administration is still evolving. We do not know the complete picture of what this foreign policy might be, insofar as its relationship with China is concerned. We're, however, hopeful the policy that would come out will be positive… and we would hope that within the next few months we would see a more concrete and clearer picture."

Singapore's Foreign Minister Vivian Balakrishnan said the ministers agreed to seek a meeting with US Secretary of State Rex Tillerson.

"We need to meet. We need to engage, and we need to listen to each other. These are early, early days," he said.

Friction between the US and China over trade and territory under Mr Trump has fuelled worry that the South China Sea could become a flashpoint.

China claims most of the energy- rich waters, through which about US$5 trillion (S$7 trillion) in trade passes every year. Brunei, Malaysia, the Philippines, Taiwan and Vietnam also have claims.

China yesterday criticised the US patrols, saying it opposes actions by other countries that undermine its sovereignty under the pretext of freedom of navigation.

Earlier this month, a US Navy P-3 plane and a Chinese military aircraft came close to each other over the South China Sea.