Big-power rivalry has turned the waters choppy, but Asean plans to navigate them on its own terms, Singapore Foreign Minister Vivian Balakrishnan stressed yesterday.

"We can protect our interests by being united and by signalling to all superpowers and rising powers around us that we want, to the maximum extent possible, to do so on our terms," Dr Balakrishnan told reporters on a day when Asean foreign ministers met chief diplomats from the bloc's dialogue partners such as the United States, European Union, Japan and India for talks.

While its 10 nations have their own differences, Asean is united on the principles of peace, openness, inclusion and free trade.

"We are entitled to take that view even if, from time to time... it doesn't completely coincide with the stated interests of one or the other superpower," he said.

"We are making good progress on the Asean perspective."

Dr Balakrishnan struck this optimistic note even as the US and China - locked in a bitter trade war that has taken geostrategic dimensions - used this annual platform to trade barbs with each other.

US Secretary of State Mike Pompeo, meeting Asean foreign ministers at the Asean-US ministerial meeting, as well as a subset of ministers from the Mekong riparian countries, criticised China for its coercion in the South China Sea, and then alleged that the currently critically low water levels in the Mekong were "linked to China's decision to shut off water upstream".

On Wednesday - as Asean foreign ministers released their annual joint communique welcoming the progress made on crafting a code of conduct in the contested South China Sea - Chinese Foreign Minister Wang Yi warned parties outside the region against amplifying disputes between rival claimants.

In a thinly veiled reference to the US, he also warned against sowing distrust between Asean and China. 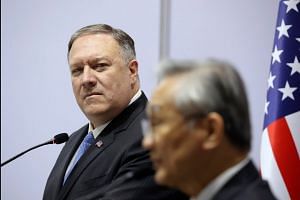 Pompeo says US not asking Asean allies to ‘choose’ between US, China

The two men struck a more conciliatory tone when they spoke briefly yesterday, with Mr Pompeo telling reporters later that he shared "a very professional discussion" with his Chinese counterpart. Mr Wang described the meeting as "deep communication".

Asean, wary of being caught in the increasingly tense rivalry between the two powers, drafted its own vision of the Indo-Pacific region in June, stressing inclusive cooperation.

Mr Pompeo stressed he was not asking Asean to take sides. "Our engagement in this region has not been and will not be a zero-sum exercise," he told the Asean foreign ministers.

Meanwhile, little progress was made on the simmering dispute between South Korea and Japan - both Asean dialogue partners - despite a bilateral meeting on the sidelines of the main programme. Both important security partners of the US amid North Korean belligerence, Seoul and Tokyo have been at odds in the past few months over the issue of wartime forced labour and trade restrictions on critical material used to make semiconductors.

A meeting between South Korean Foreign Minister Kang Kyung-wha and her Japanese counterpart Taro Kono yesterday failed to ease tensions, with Dr Kang suggesting that the security arrangements they share may even be reviewed if relations worsened.

The two ministers are due to sit down with Mr Pompeo today for a three-way discussion. Speaking to reporters yesterday, Mr Pompeo said: "We hope they will find a way to move forward together."