The Asean Community is by no means the completion of the Asean story, as the grouping has its work cut out to continue on the path of integration.

On its part, Singapore hopes to be able to discuss - with its partners in the grouping - ways to strengthen the sense of Asean oneness and identity, Prime Minister Lee Hsien Long said at the close of the 27th Asean Summit here.

The Asean Community - which takes effect on Dec 31 following a declaration that leaders signed yesterday morning - promises to turn the region into an economic powerhouse by eliminating remaining trade barriers to form a single market and production base.

Forging a shared Asean identity is one of the top priorities for the grouping, said PM Lee. 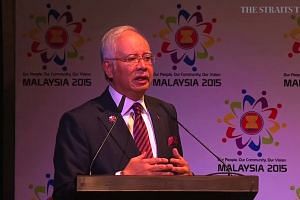 But indicating that there was still some way to go on this, he added: "One of the constraints on governments - and one of the reasons Asean finds it difficult to make progress together - is (that) there is not a very strong sense of Asean identity: it's really a Singaporean identity, a Malaysian or Indonesian identity. People don't think of themselves as being Asean, except when you have an Asean meeting and you have sing-songs together and you see what the ideal is. But to go from that ideal to a reality, I think there is some distance yet."

Fortunately, the growing volume of exchanges among young people across South-east Asia gives room for hope as this helps develop a consciousness in the younger generation. Younger people in Singapore, for instance, are undertaking projects and that will help.

The activities include expeditions to member countries and inviting young people from those countries to Singapore to interact.

PM Lee highlighted Singapore Polytechnic's Asean Outreach Thrust programme, which has brought more than 1,000 students from Asean member states to Singapore since 2012. The polytechnic received an award for its outreach efforts at this year's summit.

"As they rise in their societies, they will form a network and enable us to do more things together," PM Lee said of young people in Asean.

While he did not think a pure Asean identity is near - given the differences between countries - it was possible to develop "a stronger sense that we belong to Asean and Asean is important to us... That is something we should work towards. And decade by decade, I hope we'll be able to strengthen that sense".

In separate remarks, Malaysian Prime Minister Najib Razak said that making everyone across Asean - from the fisherman to the farmer to the foreign exchange dealer - feel in his heart that he is not just a part of Asean but is Asean is not easy. "Too often, I'm afraid, Asean can seem remote."

But projects such as special lanes for Asean citizens at every international port, an Asean Business Travel Card and strengthening internship programmes are low-hanging fruits that members can focus on, he said. There are also long-term projects that will signal to the world that Asean is serious about creating a unified identity.

"We should act more as Asean within our region: We need to cooperate to find solutions to environmental problems such as the haze, natural disasters including floods and earthquakes, and crises of migration," said Datuk Seri Najib.

Declaring that all eyes are now on members to make sure tangible steps are taken to realise the ambitions set out in the Asean Community, he said: "We have now raised the bar and the expectations of our people. We are charged with meeting the aspirations of our younger generations, and of those to come."