Asean's foreign ministers reiterated their "serious concerns" to China over South China Sea developments at a special meeting, as their Chinese counterpart urged them not to view the disputed waters as "the sum of China-Asean ties".

Instead, separately in a statement issued by Singapore's Ministry of Foreign Affairs (MFA), Dr Balakrishnan noted "the serious concerns expressed by the Asean foreign ministers over the developments on the ground and called on Asean and China to continue working together to maintain the peace and stability of the South China Sea".

Adding to the confusion, an Asean joint statement was released by the Malaysian Foreign Ministry to the media yesterday evening, only to be retracted later. 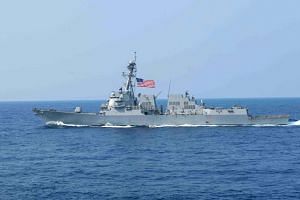 The retracted communique had said that recent and ongoing developments have eroded trust and confidence, increased tensions and may have the potential to undermine peace, security and stability in the South China Sea.

Singapore MFA's statement said the Asean ministers highlighted the need to intensify efforts to achieve further progress on the implementation of the 2002 Declaration on the Conduct of Parties in the South China Sea, as well as the substantive development of the Code of Conduct, to manage territorial disputes in the waters.

Singapore is the current country coordinator for Asean-China Dialogue Relations, which celebrates its 25th anniversary this year.

The rare special meeting yesterday, held at a lakeside resort in south-western Yunnan province, was organised partly to review and build on this 25th anniversary milestone.

The foreign ministers discussed the preparations for the Asean-China Commemorative Summit that will take place in September in Laos, the current Asean chair.

But it was the South China Sea - where China, Brunei, Taiwan, Vietnam, Malaysia and the Philippines have overlapping territorial claims - that took centre stage.

Tensions have recently been heightened by an impending United Nations tribunal ruling over an arbitration case on China's claim to the South China Sea, which the Philippines brought in 2013.

A decision is set to be announced in weeks, with many expecting the ruling to go against China. China, which has been building artificial islands on disputed reefs and placing military equipment on them, has refused to take part in the case and said it will not accept the ruling.

The Straits Times understands that the meeting, which lasted more than five hours, was cordial despite some exchanges between China and several Asean countries.

Mr Wang yesterday acknowledged that China and the Philippines "have their differences" and that both countries stated their stands at the meeting.

Mr Wang said the atmosphere at the meeting was "good" and played down Dr Balakrishnan's absence at the press conference.