In a plantation nearly twice the size of Singapore, children are playing by the street as local entrepreneurs set up stalls at a special bazaar for the Muslim fasting month. This is about as exciting as life gets for the villagers at Felda Sahabat, just outside the town of Lahad Datu on Sabah's east coast.

It is a far cry from the mortar fire and aerial bombing runs four years ago as Malaysian forces fought off at least 200 Sulu royalists from the Philippines asserting their claim over the state in a stand-off that lasted over a month.

"We could hear the bombs and gunfire. It was exciting to see fighter jets for the first time!" said smallholder Hussin Amin, 50, who worked in Felda Sahabat at the time. "But now, things are back to normal, people are working, going out to sea. It seems like the city folk are more afraid than us."

Joint patrols between Malaysia, Indonesia and the Philippines will be launched today at a meeting in Tarakan in Kalimantan - on Indonesia's side of Borneo island. Singapore and Brunei defence officials will also be present. The joint patrols are seen as timely, given the ongoing month-long occupation of the Philippine city of Marawi by Islamist militants.

But in Sabah, many of those interviewed are in fact asking for security measures to be eased.

"After the joint patrols, the night curfew should be revoked since the area is safe. This is so there isn't any more restriction on the industry," Sabah Fishery and Fishermen Association chief Arsani Arsat, who has lost a crew member to kidnappers, told The Straits Times.

In the aftermath of the February 2013 invasion that claimed over 70 lives - mostly Sulu fighters - Malaysia set up the Eastern Sabah Security Command (Esscom). This is a collaboration between the military, police and coast guard, with the unenviable task of watching over a coastline that stretches over 1,700km - twice the distance between Singapore and Penang. They also have to watch 35,000 sq km of land - 48 times the size of Singapore - and 54,000 sq km of sea.

The daily sweep includes armoured vehicles rolling in and out of coastal villages, while new forward bases complement a larger fleet of patrol boats. And combat helicopters also provide muscle overhead along the seafront.

There have been no invasions since, and the notorious kidnappings led by Abu Sayyaf militants have disappeared since December. Instead, these incidents have been limited to the Philippines, where deadly gun battles continue at sea.

Esscom declared a curfew in July 2014, with vessels needing special permits to sail between dusk and dawn. This has dampened a recovery for commercial fishing, according to Mr Arsani. Government statistics were not available for last year, but 2015 had already shown an 18 per cent drop in fish catch against the previous year.

Nearly two-thirds of a "most wanted" list of kidnappers have been eliminated, Esscom commander Wan Abdul Bari Wan Abdul Khalid told The Straits Times in an interview. 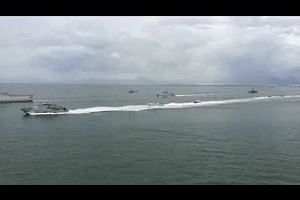 Since police killed five and captured two would-be Filipino abductors in December, they have stayed away from Malaysian waters.

Last year, tourism hit record numbers in Sabah - known for its wildlife, both on land and at sea - after two years of retreat. The recovery is seen as a sign of confidence by both the public and private sectors.

Sabah Tourism, Culture and Environment Minister Masidi Manjun told The Straits Times the military presence has given confidence to visitors.

"There are now 79 flights a week from China... We started from practically zero. There's a long list of people waiting to dive in Sipadan," he said, referring to the island that is considered one of the world's best dive sites.

Despite sporadic reports that new intruders have been spotted, villagers on the east coast seem at ease, and Datuk Wan Bari told The Straits Times none of these claims has been credible.

Mr Kenny Annol, a village leader near Lahad Datu, said fears of a new invasion have evaporated "after security forces deployed so many assets that now, we are feeling disturbed by their presence".