Asean countries have assured the US of full compliance with United Nations Security Council resolutions to pressure Pyongyang into curbing its nuclear programme.

They also assured the United States that Asean was making progress with a framework for a code of conduct in the South China Sea, where several Asean countries have overlapping territorial claims with China, which has been beefing up its civilian and military presence in the area.

But the top priority for the new US administration emerging from its meetings with Asean foreign ministers in Washington last week was North Korea, said Singapore Foreign Minister Vivian Balakrishnan.

"It's very clear they view North Korea as a clear and present danger, a threat to long-term peace and stability not only in North-east Asia, but also a threat to the US," he said in an interview with Singapore media.

"They are looking for full compliance with UN Security Council resolutions on the part of North Korea, as well as with all the sanctions that have been imposed by the UN. All the Asean countries were able to give them an assurance that we are all fully on board and will comply fully and strictly," he said. 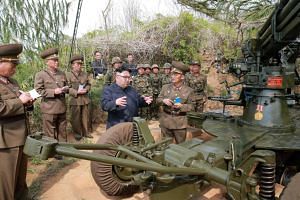 Living with the North Korean threat

Another area of focus was Asean-US economic ties.

"There's over US$100 billion (S$140 billion) worth of American exports to our part of the world, and this supports more than half a million jobs within the US," he said.

He said the US might have withdrawn from the Trans-Pacific Partnership, but South-east Asia was too big an opportunity for it to miss.

While there was no detailed discussion on trade, the US' free trade agreement (FTA) with Singapore was cited as an example favourable to the US.

"At this point of time, there is surplus in favour of America," Dr Balakrishnan said, noting that there is no anxiety on the part of the US over the FTA with Singapore.

He believes the Trump administration "as a whole remains committed to free trade".

On Friday, the Asean ministers wrapped up their two days in Washington, where they met Secretary of State Rex Tillerson, members of Washington's policy and think- tank community, and the US-Asean Business Council.

They also met National Security Adviser H.R. McMaster. Even as they discussed greater collaboration to counter extremism and terrorism, they warned Mr McMaster not to allow such efforts to come across as anti-Islamic.

In a statement, Singapore's Ministry of Foreign Affairs said Asean states and the US "affirmed the importance of the Asean-US Strategic Partnership in maintaining regional peace and stability... and agreed to further strengthen relations".

Mr Alexander Feldman, chief executive officer of the US-Asean Business Council, said the Trump administration recognises that South-east Asia matters. "It is part of what appears to be a developing strategy that puts Asean squarely in the centre of US policy in Asia," he told The Sunday Times.

A warning on terrorism, optimism on trade: Vivian Balakrishnan http://str.sg/4294

A version of this article appeared in the print edition of The Sunday Times on May 07, 2017, with the headline 'Asean assures US of stand on North Korea'. Subscribe
Topics:
More
Whatsapp Linkedin FB Messenger Telegram Reddit WeChat Pinterest Print Purchase Article Copy permalink