Meanwhile, his fellow leaders chose to look on the positive side, saying BN and its ally Parti Islam SeMalaysia (PAS) had retained the same level of support as in last year's general election as they pointed to an increase in the percentage of votes polled by PH at last Saturday's (Jan 26) by-election.

"I believe this result will be a reminder to the leaders of Pakatan that we must be aware of the people's frustrations with regard to the economy and cost of living. We must work harder to fulfil the GE14 manifesto and handle issues of race or religion for the good of all," Mr Anwar said in a statement on Sunday, referring to the country's 14th general election last year which saw the PH ending BN's six-decade grip on power.

Mr Anwar said his Parti Keadilan Rakyat (PKR) party accepted the results and congratulated BN candidate Ramli Mohd Nor on his victory. The PKR is one of the four member parties of the PH coalition, which also includes the Democratic Action Party (DAP), Parti Pribumi Bersatu Malaysia and the Parti Amanah Negara.

Mr Ramli, 61, won with 12,038 votes to the 8,800 votes polled by the PH's Manogaran Marimuthu while independent candidates Wong Seng Yee and Sallehudin Ab Talib received 276 and 314 votes respectively. The turnout was 68.8 per cent, with 21,428 votes tallied and 568 spoilt votes.

Mr Ramli's 3,238-vote majority is a sharp increase from the 597-margin secured by BN's C. Sivarraajh in the 14th General Election.

In George Town, DAP secretary-general Lim Guan Eng on Sunday conveyed his congratulations to former prime minister Najib Razak for aiding BN to win the by-election and hailed Mr Ramli for making history by becoming the first orang asli (aboriginal people) from Peninsular Malaysia to be elected as a Member of Parliament. 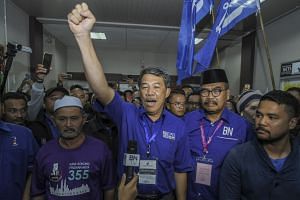 Mr Lim also congratulated Umno - the BN's biggest component party - and its ally PAS for roping in support from BN partners Malaysian Indian Congress and the Malaysian Chinese Association to bolster support for its candidate at the by-election.

Mr Lim, who is also Finance Minister, said that despite its defeat, the PH was still pleased that it secured 3 per cent more votes than during the last election. "This gives us the strength to forge ahead and improve our machinery for the next by-election," he said.

In Putrajaya, Parti Amanah Negara communications director Khalid Abdul Samad said the votes polled by BN were similar to the total votes received by the coalition and PAS last year.

"Realising that the support for MIC candidates was waning, Barisan fielded an Umno-linked candidate, and used the race and religion card to garner support," he said.

"I don't see how Barisan can take this as a big success because Cameron Highlands has always been a Barisan stronghold," the Federal Territories minister said.

"Non-Malay turnout was reduced but the percentage of support remained. That could only be achieved if the Malay and orang asli votes slightly shifted to our side," he said.

Aside the increased vote majority, the PH managed to find another silver lining in its defeat, which was Mr Manogaran's third loss in three attempts for the parliamentary seat.

"In the nine orang asli settlements, of which four are in Tanah Rata and five in Jelai, we only got 479 votes in GE14, but now it has risen to 1,226. We will continue working to increase support among voters from all ethnic groups in Cameron Highlands," he said.