PORT DICKSON (THE STAR/ASIA NEWS NETWORK) - Datuk Seri Anwar Ibrahim says his critics should start using new tactics to discredit him instead of still trying to link him to sodomy acts, saying this was a stale approach.

"This (being accused of sodomy) has been going on for 20 years. Enough lah... please look for other issues. I am not affected and least bothered (by the allegation)," he told reporters in Port Dickson on Monday (Oct 1).

Mr Anwar was asked to respond to a post, which went viral on Sunday (Sept 30), alleging that he had recently sodomised an Indonesian student in Singapore.

The post claimed that the victim had lodged a police report in Singapore and was recuperating in a hospital in the Republic.

The post was made viral by Umno supreme council member Lokman Noor Adam, who claimed a Singapore news outlet as the source of the story.

But the Singapore news outlet BERITAMediacorp, a Malay news site under Singapore's Mediacorp group, denied being the source of the report.

A check by The Star on Sunday found that Datuk Lokman had posted on his Facebook account a correction to say BERITAMediacorp did not publish the news. 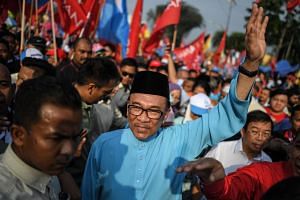 Asked if he would take legal action against Mr Lokman, Mr Anwar only said that he would focus on the Port Dickson by-election for now.

Mr Anwar, the incoming president of Parti Keadilan Rakyat (PKR), is a candidate in the Oct 13 by-election in the Negeri Sembilan beach town, to mark his return to Parliament.

PKR communications director Fahmi Fadzil said he had lodged a report on the matter at the district police station at 11am on Monday.

"I have also asked friends in other states to lodge reports so that appropriate action can be taken against those who spread fake news," he said.