Malaysian politician Anwar Ibrahim will face off against six other candidates, including a former aide who accused him of sodomy, in a closely watched by-election in Negeri Sembilan state.

Datuk Seri Anwar's biggest challenge, though, might turn out to be whether he can fire up the imagination of Port Dickson residents so that they will come out in droves to vote for him on Oct 13.

There have been three by-elections since the May national polls, all with poor voter turnout of under 45 per cent of registered voters in the wards - compared with the 82.3 per cent total turnout in the general election.

Analysts have cited extreme voter fatigue as a reason for the low interest in the three by-elections, all in Selangor, as they were held soon after the hard-fought May vote.

To fire up Port Dickson, Mr Anwar must treat the vote as a mini referendum on his leadership, said political scientist Wong Chin Huat of the Penang Institute think-tank.

Mr Anwar, 71, is expected to become Malaysia's eighth premier in about two years, with Prime Minister Mahathir Mohamad stepping down as agreed by the governing Pakatan Harapan (PH) alliance.

It's up to Saiful... I don't want to interfere.

MR ANWAR IBRAHIM, on what his reaction would be if former aide Mohd Saiful Bukhari Azlan were to bring up the sodomy case.

This is purely me entering the democratic process... It has been a long time (since we met)... We just said, 'Hi'.

Mr Anwar needs to use the by-election as a chance to show "how he can bring Malaysia forward after Mahathir, who has turned into an arch reformist with his latest pledge on United Nations human rights covenants", said Mr Wong, referring to Tun Dr Mahathir's address at the UN General Assembly last Friday.

"Anwar needs to fire up Malaysians' imagination - not just the local voters - on what changes he can bring." 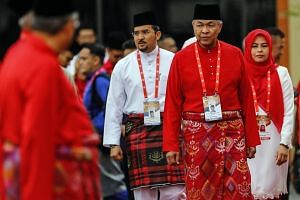 Umno pledges to fight on for Malays and Islam

In the May polls, 83 per cent of registered voters in Port Dickson cast their ballot. The parliamentary ward is a PKR stronghold that the party has won in the last three general elections.

Asked about the candidacy of Mr Mohd Saiful Bukhari Azlan, his former aide, Mr Anwar said yesterday that he would not be drawn into the campaigns of other candidates.

"I am concentrating on my task, which is to strengthen the government under the leadership of Dr Mahathir Mohamad, and to ensure we fulfil our commitments to Port Dickson voters and people," he told reporters at the nomination centre yesterday.

Asked what his reaction would be if Mr Saiful, 33, were to raise the sodomy issue in the campaign, Mr Anwar said: "It's up to Saiful. I don't want to interfere."

The by-election was called after PKR Member of Parliament Danyal Balagopal Abdullah stepped down to open a path for Mr Anwar to return to Parliament. Mr Anwar must be an MP before he can be picked by his coalition to become Malaysia's prime minister.

The Saiful sodomy case first made headlines a decade ago, and Mr Anwar was given a five-year jail sentence in March 2015, after the Federal Court upheld his conviction for sodomising Mr Saiful in 2008.

Mr Anwar was in jail for three years but was given a full pardon by the Malaysian King in May after PH won the general election.

Mr Saiful told reporters yesterday that he will not raise "old issues", and that his participation was not about vengeance or revenge. "This is purely me entering the democratic process," he said.

He said Mr Anwar's by-election move showed he is pushing to become prime minister soon, which could cause political instability.

"Why not wait two years, then we change?" Mr Saiful told reporters. "So my pledge is if the people of Port Dickson and Malaysia would like political stability in this country, then please vote for me."