PUTRAJAYA - Malaysia's jailed opposition leader Anwar Ibrahim appeared at the Palace of Justice on Thursday (Sept 7) to give his testimony to the Royal Commission of Inquiry (RCI) which is investigating the Malaysian central bank's foreign exchange losses in the 1990s.

Anwar, who is now serving a five-year prison term for sodomy, was escorted by Prison Department personnel when entering the court at about 8.40am, the Bernama news agency reported.

The vehicle bringing Anwar was escorted by the Royal Malaysia Police and the Prison Department, using a special lane to the court grounds which avoided the media presence, the Bernama report said.

Anwar served as Malaysia's finance minister from 1991 and became deputy prime minister two years later. He remained in both roles until he was sacked in 1998.

The inquiry was set up by the government in July to probe into the losses which occurred in the early 1990s when the central bank embarked on aggressive forex trading. 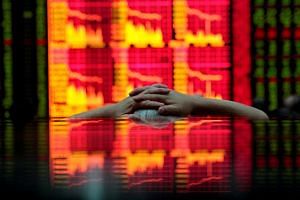 Its formation more than 20 years after the incident has caused critics to raise concerns that the probe is targeted at Dr Mahathir, who was prime minister during the scandal.

The RCI determined on its first day of sitting that the country lost RM31.5 billion from forex trades in that period. This was higher than the initial sum of RM9 billion reported by the government led by Tun Dr Mahathir Mohamad in the 1990s.

Former BNM governor Zeti Aziz said in her testimony on Wednesday, however, that RM32 billion in 1990s value was lost by the BNM in its forex trading for the period between 1988 to 1994.

Talk of the billions of dollars lost by Bank Negara Malaysia (BNM) first began to surface in 1992. Witnesses have said the losses occurred between 1988 and 1992, with the unwinding of positions taking up to 1994.

Dr Mahathir was also present at the court on Thursday. He sat next to Anwar's wife, the president of the opposition Parti Keadilan Rakyat (PKR) Wan Azizah Wan Ismail. Anwar's daughter Nurul Izzah Anwar and other members of his family were also at the court.

Thursday is the sixth day of the RCI proceedings, which have so far seen 18 witnesses being called to testify.

Earlier, the BNM's director of foreign exchange management department Azman mat Ali said Dr Mahathir never entered the forex trading room at the central bank when questioned by Dr Mahathir's lawyer on whether the former premier had entered the room in London while Azman was carrying out trading.

Asked whether he was based at the BNM office in London when Dr Mahathir officiated the opening of the forex trading room there, Azman said the event was held several years before he was posted as a dealer in the London office.

He said as a dealer at that time he carried out the dealings on instructions by the Chief Dealer and Tan Sri Nor Mohamed Yakcop, who was then Bank Negara's adviser. "Apart from reporting to Nor Mohamed and the chief dealer, nobody knew the extent of the forex trading,” he said.

He also said he had carried out forex transactions on the instructions of Nor Mohamed which could exceed US$1 billion a day.

Nor Mohamed, a key witness in the scandal, denied on Wednesday during his court appearance that he had personally executed any of the foreign exchange trades that resulted in massive losses. He also told the inquiry that he could not recall the highest forex transaction done in a day, or a month, during the period.

The RCI panel must complete its inquiry and submit its report to the Yang di-Pertuan Agong by Oct 13.