His intention is to divide Indonesia in wake of rising racial and religious tension, say analysts

The Islamic scholar who announced a campaign to target the business interests of rich ethnic Chinese Indonesians and foreign investors from China has been slammed by political observers.

They said Mr Bachtiar Nasir's remarks, which followed Wednesday's imprisonment of Christian- Chinese politician Basuki Tjahaja Purnama for blasphemy, do not represent most quarters across Indonesia, a Muslim-majority country. Some experts called the GNPF-MUI chief an also-ran who was fuelling anti-Chinese sentiments to gain prominence among Muslim hardliners, in the wake of rising racial and religious tensions in Jakarta.

"Bachtiar Nasir is a demolition man. Whatever he says is meant to destroy," political analyst Boni Hargens told The Sunday Times yesterday. "His intention is to divide Indonesia using the ethnic issue, so that the Chinese in Indonesia will become public enemies."

GNPF-MUI is the local acronym for the National Movement to Safeguard the Fatwas of the Indonesian Ulemas Council, a coalition group that opposes Basuki.

Mr Bachtiar, who is the group's chairman, said in a Reuters report last Friday that "the wealth of Indonesia's ethnic Chinese minority was a problem and advocated an affirmative action programme for native Indonesians".

He also said that foreign investments, especially those from China, had not helped Indonesians in general and ethnic sentiment cannot be denied when addressing the issue of inequality among indigenous Indonesians, or pribumi. 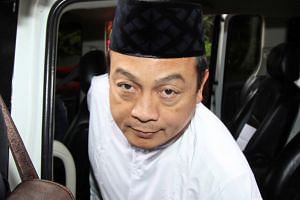 The government, which has been courting investments from China, has refuted Mr Bachtiar's accusations that it offers special treatment to Chinese Indonesians or foreign investors.

Official figures from Indonesia's central statistics agency show that ethnic Chinese make up just 1.2 per cent of Indonesia's population of more than 250 million.

But among them are wealthy business owners such as Lippo Group founder and chairman Mochtar Riady and MNC Group chief executive Hary Tanoesoedibjo.

Professor Ari Kuncoro, from Universitas Indonesia (UI), said while it is a fact that many top Indonesian businessmen are "non-pribumis", they will never outnumber their pribumi counterparts.

"Bachtiar's suggestion is off because he doesn't read data," said the dean of UI's School of Economics and Business. "In fact, the top pribumi businessmen started climbing the ladder during the Suharto era, when he awarded them projects which, in effect, was affirmative action by Suharto then."

It was during the long reign of the former president when resentment against the ethnic Chinese led to riots and outbreaks of violence. The unrest paved the way for the eventual downfall of Suharto in 1998.

The GNPF-MUI, along with other hardline Muslim groups, has organised several mass protests against Basuki since late last year. A riot broke out at the end of one protest on Nov 4, invoking memories of the 1998 incident.

Mr Bachtiar's remarks had a similar effect, but experts have dismissed them, saying Indonesia today is very different from the one in 1998. "Investors should remain calm because Indonesia is still a country with a rule of law," said Mr Harry Su, head of research at Jakarta-based Bahana Securities.