KUALA LUMPUR (The Star/Asia News Network) - All 15 suspected militants linked to the Islamic State in Iraq and Syria (ISIS) arrested over last month's bomb attack at a nightclub in Puchong, Selangor are from the northern Malaysian state of Kedah.

The terror group carried out its first successful attack in Malaysia last month, with two men on a motorcycle throwing an explosive device into the Movida Nightclub in Puchong, injuring a dozen people. 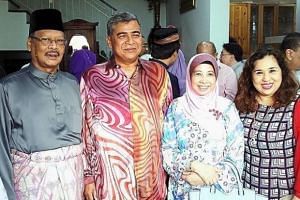 "They rely less on usra (talks) and more on technology to communicate and indoctrinate their followers," he told The Star on Saturday (July 23).

He said since 2013, 229 suspected militants including 29 foreigners had been detained, while 90 Malaysians were known to have gone to Syria, of whom 21 had died and eight had returned.

"ISIS targets troubled people, who are easily swayed with their own twisted version of Islam," he said.

Among the foreigners detained, 15 were from Indonesia, five from Iraq, and two each from the Philippines and Russia.

On fugitive militant is Dr Mahmud Ahmad, who fled to southern Philippines. SAC Ayob said he was still in Basilan.

"We believe he was responsible for several articles published in the ISIS newsletter Al-Fatihin. He is expanding ISIS propaganda through his writings," he said, referring to the publication banned last week by Singapore.

Since 2013, Perak has had the highest number of arrested suspected militants, at 33.

"Unlike JI, ISIS fooled their followers into believing that they were 'reuniting' Muslims under the salafi Jihadi teachings. They selected certain verses from the Quran to recruit followers," he said.

"The videos are meant for them to show their so-called might and relevance within ISIS.

"However, I feel it is more of a recruitment drive," he said.

The videos included one which showed the terror group's goal of setting up a nusantara ISIS involving Malaysia, Indonesia and the Philippines.

"However, they lack the ability to be fully operational in the region given our constant enforcement effort," he said.

The fear remained, however, that the number of Malaysians joining ISIS could be increasing, added SAC Ayob.