Jakarta governor will not be detained, but move expected to weaken calls for rally

Indonesian police yesterday formally named Jakarta governor Basuki Tjahaja Purnama a suspect over alleged blasphemy and barred him from travelling abroad, with the case likely heading to a trial.

The popular Chinese-Christian politician, who is seeking re-election in the Feb 15 polls, can continue to stand as a candidate but the police probe has become a big distraction for him in the ongoing electoral campaign.

The police announcement comes after more than 100,000 Muslims took to the streets of Jakarta on Nov 4 to demand that Mr Basuki, 50, be sacked and prosecuted for allegedly insulting Islam.

Police said Mr Basuki, who is better known as Ahok, will not be detained during the probe as there was dissenting opinion among the 27 police investigators whether the case is considered a criminal investigation, when suspects are sometimes detained. 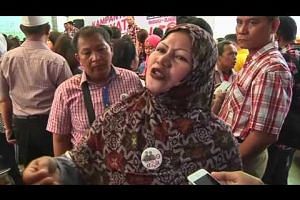 The decision to name him a suspect is expected to weaken calls by the hardline Islamic Defenders Front (FPI) for another mass rally on Nov 25, analysts said.

Mr Basuki yesterday said he accepted his status as a suspect, according to the Detik news website. "Our police forces are professional," he was quoted as saying. "This isn't the end."

Once the probe is completed, the police are required by law to submit the investigation dossier to state prosecutors, who will table it before a district court if there is a strong legal basis to proceed.

The controversy started in September after a video clip of Mr Basuki was posted online. In the video, he told a group of constituents at a community event not to be misled by his opponents, who were urging Muslims against choosing a non-Muslim as a leader by referring to a verse in the Quran.

Mr Basuki has apologised for his remarks, but a police probe was initiated after an outcry from some Muslim leaders as well as the FPI, which led to the mass protest earlier this month that descended into a riot.

The blasphemy offence carries a maximum jail term of five years if Mr Basuki is found guilty, but he could remain in office until the appeals process has been exhausted.

Mr Basuki had been widely expected to be re-elected as Jakarta governor after pushing through urban renewal projects, including resolving the city's major flooding issues, cleaning up the city as well as clamping down on vice.

He and running mate Djarot Saiful Hidayat are backed by the ruling Indonesian Democratic Party - Struggle (PDI-P) as well as a strong coalition of political parties including Golkar, the second-largest party after PDI-P.

Despite the heat from Muslim hardliners, Mr Basuki remains hugely popular in the capital city. The coalition led by the PDI-P has also closed ranks behind him to fend off calls for him to be sacked.

Mr Basuki is currently on leave to do his campaign rounds. But at some of his campaign stops, protesters rejected him with banners and posters due to the blasphemy controversy.