Richard, 18, who belonged to a gang and had figured in petty crimes, was stabbed in 2001. Three months later, Ms Alia was burying another son, Christopher, 17.

Two years later, at the same market where Christopher was killed, a third son, Bobby, 14, was stabbed. He was caught by police days earlier stealing a mobile phone.

In 2007, Fernando, who was 15, was also murdered, near the market where his three brothers died.

Ms Alia told US-based watchdog Human Rights Watch (HRW) that her sons were no angels, but they did not deserve to die like dogs. 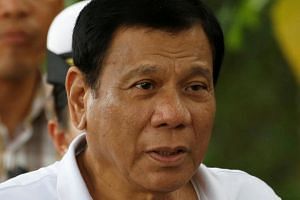 She said she knows who killed them, and she sees these men now running the country and spreading their deadly franchise out of Davao.

The Alia murders were among hundreds of extrajudicial killing cases filed as evidence against Davao's "death squads" in a 2009 probe.

These killings were first investigated in 2008 by HRW.

In 2009, the Philippine Commission on Human Rights, led then by lawyer Leila de Lima, began its own probe based on the HRW report.

In 2012, it concluded that Davao's "death squads" killed at least 206 men, women and children as young as 12 from 2005 to 2009, in the cases reported by HRW. Most had criminal records, but some were just in the wrong place at the wrong time.

Am I the death squad? True. That's true.

MR DUTERTE, on TV during his presidential campaign. He later said it was a joke.

In one case, three men pumped six bullets into 20-year-old Mr Jaypee Larosa at an Internet cafe on July 17, 2008. A witness heard one of the killers say, after he removed Mr Larosa's baseball cap: "Son of a b****, this is not the one."

HRW reported that out of 671 documented cases from August 1998 to May 2008, half of the victims were believed to be gang members or involved in petty crime and drug dealing. It said 13 appeared to be cases of mistaken identity. At least two were killed by stray bullets. As for the rest, it was not known if they were involved in any crime.

There were many cases where the victims would be released after being arrested, only to be slain as soon as they walked out of jail.

On Nov 20, 2005, for instance, Mr Rodolfo More, 22, was picked up for theft. With no evidence against him, he was released two days later. Moments after he left jail, he was stabbed inside a jeepney.

According to activist priest Amado Picardal, who is also tracking extrajudicial killings, reports sent to him by fellow activists said the squads killed over 1,400 from 1998 to last year. Because they operate in the shadows, information about the death squads is sketchy.

Some police officers have been named as "amo" - handlers. They are said to be providing training, weapons, ammunition and motorcycles, and identifying targets culled from intelligence provided by neighbourhood watchmen.

Former communist insurgents and guns for hire provide the muscle. Their usual pattern is to ride in two or three on motorcycles, casually walk towards their targets and either shoot or stab them.

But explosive allegations given to the Senate last week by Mr Edgar Matobato, 57, a self-confessed hitman who claims to have been part of a group of ruthless killers known in Davao as the "Lambada boys" from 1988 to 2013, paint a more macabre, chilling picture.

The goal, he said, was to sow terror. "The officers told us ordinary killings won't do. They are sadists."

He said in one harrowing incident in 2007, a unit under Justice Ministry agent Dante Gierran abducted a man suspected of being the head of a kidnapping gang. The man was hogtied, his body slashed, and he was pushed, while still alive, into a pond with a crocodile.

Mr Matobato testified that he witnessed at least a thousand murders, and he killed about 50 people. In 2002, he said, he garotted a suspected Islamist terrorist in a quarry owned by a policeman in Davao, then hacked his body into pieces and buried them.

Mr Matobato told the Senate the killings began in 1988 when Mr Rodrigo Duterte, a tough-talking city prosecutor with a liking for Clint Eastwood and Charles Bronson movies, became Davao's mayor.

At the time, Davao was regarded as the "murder capital" of the Philippines. Communist guerillas and security forces were waging a bloody war in the city.

Mr Duterte won by promising to bring peace to Davao, at all costs.

Mr Matobato said he was drafted into a group of seven policemen and former communist assassins. He said he understood they were taking orders directly from Mr Duterte or police officers under him. Their orders were "to kill criminals, drug pushers, snatchers, rapists", he said.

It was not until the mid-1990s, though, when Mr Duterte was in his second term as Davao mayor, that the rest of the nation took notice of the killings.

By then, Mr Matobato's squad of seven had grown to about 500, and they were branding themselves the "Suluguon sa Katawhan" - Servants of the People. The media, however, took to calling them the "Davao death squads".

Mr Duterte, meanwhile, began living the urban myth that went with his anti-crime push. He rode around the city on big motorcycles, with dark glasses and jacket, and a gun tucked at his waist. He prowled the streets in a taxi so he could shoot robbers himself, he told the media.

In 2001 and 2002, he got into the habit of announcing on radio or TV the names of people he said were "criminals". Days later, these people would turn up dead, said HRW.

In 2009, Mr Duterte laid down his law: "If you are doing an illegal activity in my city, if you are a criminal or part of a syndicate that preys on the innocent people of the city, for as long as I am the mayor, you are a legitimate target of assassination."

Mr Duterte's ties to Davao's death squads, however, have been fuzzy. At most, he may be guilty of nothing more than acting as their cheerleader.

Mr Matobato said he saw Mr Duterte pump "over 200 bullets" into a government agent who figured in a shootout with his men in Davao in 2007. But he is the only one making that claim.

In one TV show, as he was campaigning to become president, Mr Duterte declared: "Am I the death squad? True. That's true." He would later say he was just "teasing".

In US State Department documents released by WikiLeaks, a political officer from the United States Embassy in Manila said Mr Duterte "acknowledged his active support of the Davao death squad group".

But no one, besides Mr Matobato, whom Mr Duterte's allies are pillorying as a "perjured witness", has come forward to say the Philippine President himself created the death squads and ordered the killings.

The human rights commission, now under anti-Marcos activist Chito Gascon, has suggested reopening investigations into the killings in Davao.

A version of this article appeared in the print edition of The Sunday Times on September 18, 2016, with the headline 'A peace that was forged in blood'. Subscribe
Topics:
More
Whatsapp Linkedin FB Messenger Telegram Reddit WeChat Pinterest Print Purchase Article Copy permalink