BUKIT MERTAJAM (THE STAR/ASIA NEWS NETWORK) - The 60-year-old mother of two siblings who allegedly abused their Indonesian maid to death in Jalan Green Hall, George Town, has been remanded for seven days to facilitate investigations into the case.

Clad in a blue dress, the frail-looking woman arrived in a police truck at the courthouse here at 9.35am.

She struggled to get down from the back of the truck and had to be assisted by officers on duty.

Later, court registrar Nor Hapipah Abdullah granted a seven-day remand for the suspect until Feb 19.

The case is being investigated under Section 302 of the Penal Code for murder.

The woman was arrested at Jalan Green Hall in George Town at about 2.30pm on Monday (Feb 12), two days after her 39-year-old son and 36-year-old daughter were arrested.

Last Saturday, the victim Adelina Lisao, 26, was found sitting in the porch of a house in Taman Kota Permai with a swollen head and face, as well as injuries on her arms and feet.

She was admitted to Seberang Jaya Hospital on Sunday but died shortly after.

"The failure of the organs could be due to lack of blood as she was neglected," he said. "Prior to the incident, we did not receive any reports of abuse."

At the Seberang Jaya Hospital, where the post-mortem was conducted, the Indonesian Consulate-General's Consu­lar Affairs consul Neni Kurniati said they were trying to locate Adelina's home in Indonesia as there were inconsistencies with the address in her passport.

"We are searching for the exact address in Nusa Tenggara Timur, and not in Medan as reported earlier," Ms Neni said. "Based on the passport, she had been working with the present employer since December 2014."

She said the consulate was checking with the Immigration Department whether Adelina, who was hired through an agency, had a work permit. 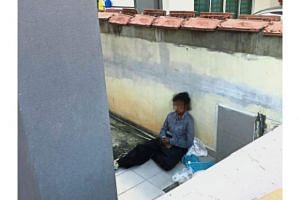 "Her body will be taken back to Indonesia for a proper burial once investigations are completed," she added.

Her head and face were swollen and she had injuries on her arms and feet as well.

Neighbours claimed the woman was forced to sleep with a Rottweiler outside the house for over a month.

In Putrajaya, the Immigration director-general, Datuk Seri Mustafar Ali, said employers applying for foreign workers will have to go through background checks, including for crime.