ATTAPEU TOWN, LAOS (NYTIMES) - The day before this week's catastrophic dam failure in Laos, the companies building the dam knew that it was deteriorating, and one of them saw a potential trouble sign three days in advance.

Yet many people living downstream received no warning of the deadly flood that was about to sweep away villages, farms, livestock and people.

The companies said they had warned Laotian officials of the danger, and some villages were evacuated, but the dam's collapse killed at least 27 people - many more are still missing - and displaced at least 6,600 others in Laos.

On Thursday (July 26), state media in Cambodia reported that as many as 25,000 more people in that country were being evacuated from the northern border province of Stung Treng as the flood surge made its way south.

Now, as rescue workers scramble to find missing villagers and care for others in makeshift shelters, questions are mounting about the speed of the one-party state's response, the quality of the companies' work, and whether they could have done more to prevent the accident or alert people to the peril.

Xe-Pian Xe-Namnoy Power Co, a joint venture of two South Korean firms, one from Thailand and a state-owned Laotian firm, is building the hydroelectric project, which includes several dams.

Even the lower volume would be enough to cover an area the size of Manhattan in water 28 feet deep.

Accounts given by the two South Korean companies differ in several details, and do not answer the crucial question: When did they know, or should they have known, that the dam might be headed toward collapse?

On Friday, engineers noticed a depression, or "settlement", about 10cm deep, in the centre of the dam, Korea Western Power, one of the companies, said in a report to South Korea's Parliament.

A company official told lawmakers - one of whom released the report on Thursday - that such sinking was common with the kind of heavy rainfall the region was experiencing, so the engineers decided to monitor it rather than take action.

On Sunday, engineers found 10 "fractured settlements" on the top of the dam and set out to repair them, but could not get the necessary repair equipment to the scene until Monday afternoon, when it was too late, the company's report said.

SK Engineering & Construction of South Korea, the main builder of the project, said Thursday that it had discovered at 9pm on Sunday that part of the dam's top was missing.

In a statement, the company said it had "immediately" reported the damage to local authorities and evacuations of the nearest villages began, but it did not alert the provincial government until noon the next day that the dam might deteriorate further.

By 11am on Monday, Korea Western Power said, there was a depression more than 90cm deep in the top of the dam.

On Monday, the joint venture sent a written notice to provincial officials, which has been seen by The New York Times, warning that Saddle Dam D was in a "very dangerous condition now due to heavy rainfall", and that villagers downstream should be told to "evacuate to high level position to avoid unfortunate accident by heavy water flow".

By Monday afternoon or early evening, the dam was crumbling further and water was pouring through. SK said it received the first report of a village flooding at 1.30am on Tuesday.

Both South Korean companies mentioned heavy rains in their descriptions of the disaster.

But Dr Ian Baird, a geography professor at the University of Wisconsin, Madison, who specialises in Laos and has studied the hydropower project, said he believed the problem was either faulty construction, or a decision to store too much water in the dam's reservoir at a time when heavy rain should have been expected.

"When at the end of July do we not get rain in this part of the world?" he asked.

The companies are "trying to play this out as a natural disaster that wasn't their fault", he said. "I don't believe that for a second."

Xe-Pian Xe-Namnoy Power Co could not be reached by telephone on Thursday.

The United Nations has said that eight villages were affected by the flooding. Experts and displaced villagers said in interviews this week that the number could be 11 or more.

Some were probably in an area that is extremely isolated in the rainy season, even without a major flood event, Dr Baird said.

"I'm sure there are still lots of people who nobody has reached yet," Dr Baird said.

Some people might have scrambled to higher ground, but it would depend on when they were notified of the threat.

A day after the accident, the UN reported that 14 bridges had been damaged in Laos and at least 1,494 people there had been evacuated to emergency shelters.

It said helicopters and boats were the only means of transportation in the affected areas of Attapeu province, where rates of child malnutrition are among the highest in the country. 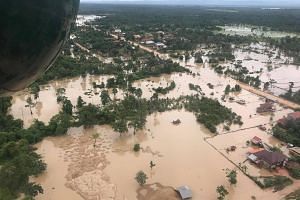 After dam burst in Laos, a scramble for food, medicines and coffins

What we owe the victims in Laos: The Nation

On Thursday, a reporter who travelled into the affected area - a three-hour drive on bumpy roads from Attapeu Town - saw military personnel and volunteers from several countries steering boats through the floodwaters in a grim search for bodies.

Some people there were beginning to return to villages that had been underwater earlier in the week, only to find that all their possessions had been destroyed.

Mr Octavian Bivol, the Unicef representative in Laos, said on Thursday that while the agency was providing Laotian authorities with soap, jerrycans and other supplies to assist the equivalent of 1,500 households, the primary challenge was that so many of the flood victims were so isolated.

At least some of the affected villages had no warning of the lethal threat racing toward them.

Ms Silam, a 25-year-old woman from southern Laos with two children, said in an interview that she had escaped the floods on Monday night after receiving a phone call not from the government, but one of her relatives who was in a nearby rice paddy.

The relative told her to leave the house and move to higher ground "because the water was coming", she recalled, speaking in a shelter in the southern town of Paksong on Wednesday evening. "I was so scared."

Mr Bruce Shoemaker, an independent expert on hydropower in Laos, said that the dam was already "a slow-moving humanitarian and ecological disaster" even before the accident on Monday, in part because all the water diversion was a severe threat to downstream fisheries, the main source of protein for local people.

"The big thing is there's a very poor regulatory environment in Laos," said Mr Shoemaker, a co-editor of the book Dead in the Water: Global Lessons from the World Bank's Model Hydropower Project in Laos.

"Private companies get these concessions and there's very little oversight of how they're implementing it," he added, "and that is pervasive throughout the hydropower sector."