The bloodshed in Myanmar's western Rakhine state was triggered by an attack on Aug 25 on dozens of police posts and an army base by Rohingya insurgents. The ensuing clashes and a military counter-offensive have killed at least 400 people, including 370 militants, according to the army.

Human rights monitors and Rohingya fleeing to neighbouring Bangladesh say the Myanmar army is trying to force the Rohingya out with a campaign of arson and killings.

Over the past five years, Rakhine has been divided along ethnic and religious lines, but the current violence is the worst yet.

The treatment of the roughly 1.1 million Muslim Rohingya in Buddhist-majority Myanmar is the biggest challenge facing Ms Suu Kyi, accused by the West as well as Muslim countries of not speaking out for the minority that has long complained of persecution. 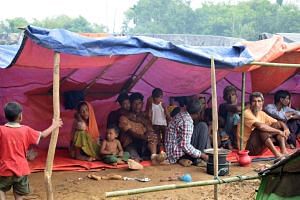 The number of those crossing the border into Bangladesh - 87,000, based on calculations by United Nations workers - surpasses the number who escaped Myanmar after much smaller insurgent attacks in October last year set off a military operation.

Bangladesh officials have said at least 54 people have drowned trying to reach the country.

"No non-government organisations came here. We have no food. Some women gave birth on the roadside. Sick children have no treatment," said Mr Mohammed Hussein yesterday. The 25-year-old was still looking for a place to stay, four days after fleeing.

Most of the new arrivals have crammed into camps near the border, where the UN said local people were helping the relief effort.

Among new arrivals, about 16,000 are school-age children and more than 5,000 are under the age of five who need vaccine coverage, aid workers said over the weekend. The number of unaccompanied children is high and many are "traumatised and hungry", they said.

The UN special rapporteur for human rights in Myanmar, Ms Yanghee Lee, has criticised Ms Suu Kyi for failing to protect the Rohingya.

"The de facto leader needs to step in - that is what we would expect from any government, to protect everybody within their own jurisdiction," said Ms Lee.

Protests have broken out in Malaysia, Indonesia, Turkey and the Russian region of Chechnya over the Rohingya's plight, as anger grows among Muslims about violence against the group.

Yesterday, thousands gathered in Chechnya for an officially staged rally. On Sunday, a petrol bomb was thrown at Myanmar's embassy in Jakarta.

Indian Prime Minister Narendra Modi is expected to talk about the Rohingya issue too when he visits Naypyitaw today.

Turkish President Tayyip Erdogan and Iranian Foreign Minister Javad Zarif have called for UN intervention in Myanmar, saying that violence against the country's Muslims amounted to genocide and ethnic cleansing. And Pakistan urged the "authorities in Myanmar to investigate reports of massacre, hold those involved accountable and take necessary measures to protect the rights of Rohingya Muslims".

In addition to tens of thousands of Rohingya, more than 11,700 "ethnic residents" had been evacuated from Rakhine state, the Myanmar government has said, referring to non-Muslims.

Last Wednesday, ultra-nationalist monk Ashin Wirathu and hundreds of protesters rallied in Yangon for strong military action against the Rohingya for their alleged collusion with extremist groups.