The clash with more than 100 members of the Abu Sayyaf group broke out in the town of Patikul in Sulu province at 11.30am local time yesterday as troops pursued those behind the Jan 27 church attack, said Colonel Gerry Besana, spokesman for the military's Western Mindanao Command.

Abu Sayyaf is a militant organisation notorious for kidnappings and extremist factions and has pledged allegiance to the Islamic State in Iraq and Syria (ISIS).

Sulu province, in the country's Mindanao region, is a known stronghold of the group.

The deadly clash in Sulu comes nearly a week after the deadly blasts that left 22 people dead in a Catholic church.

Interior Secretary Eduardo Ano said on Friday that two suicide bombers from Indonesia were behind the church explosions in Sulu that also injured about a hundred people, with the Abu Sayyaf acting as a guide. 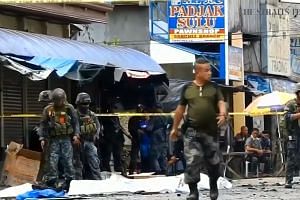 CNN Philippines also quoted Mr Ano as saying there are still some foreign terrorists in the country.

ISIS claimed responsibility for what it said were suicide bombings. Such attacks are almost unheard of in the Philippines.

The probe into the church bombings has been fraught with inconsistent and sometimes contradictory accounts from the authorities and, according to one investigator interviewed on television, complicated by a contaminated crime scene.

Security officials initially said the two bombs were detonated remotely. But by Tuesday, that changed after President Rodrigo Duterte said there may have been a suicide bomber.

Defence Secretary Delfin Lorenzana said on Friday that bag checks at the entrance to the church would have made it difficult to plant a bomb there, so a device strapped to the body was more likely.

Mr Lorenzana also said earlier that a Yemeni couple may have been behind the blasts.

The Philippine military last week launched an airstrike against a splinter group from the Abu Sayyaf that it believed led the attack.

In nearby Maguindanao province, military operations have intensified in a terrorist lair, and bomber planes were used to destroy militants' bunkers.

The bombings follow a peaceful Jan 21 referendum that overwhelmingly approved autonomy for the predominantly Muslim parts of Mindanao, following a peace accord that excluded the Abu Sayyaf.

Martial law has been in place in Mindanao since domestic and foreign fighters dressed in black outfits overran Marawi City in 2017 and clung on through five months of air strikes and street battles that were reminiscent of scenes in Syria and Iraq.

The recent violence has rekindled fears about the extent of ISIS's influence in South-east Asia, and the lure of Mindanao for extremists from Malaysia, Indonesia and elsewhere.

On Wednesday, two people were killed when a grenade was thrown into a mosque in nearby Zamboanga, a mainly Christian province. It is not clear who was behind the attack.

A version of this article appeared in the print edition of The Sunday Times on February 03, 2019, with the headline '8 dead in firefight with Abu Sayyaf militants'. Subscribe
Topics:
More
Whatsapp Linkedin FB Messenger Telegram Reddit WeChat Pinterest Print Copy permalink