MANILA (PHILIPPINE DAILY INQUIRER/ASIA NEWS NETWORK)- A survey has found that 76 per cent of voting-age Filipinos are satisfied with President Rodrigo Duterte's performance some 100 days after he took office, apparently happy with his ultra-hardline stance on crime and unfazed by his threats to "break up" with top ally the United States.

Eleven per cent of respondents said they were dissatisfied with the 71-year-old leader, while 13 per cent were undecided, according to the Sept 24-27 poll by non-profit research institute Social Weather Stations.

The Duterte administration marks its 100th day in office on Oct 8.

The institute said Mr Duterte's "net satisfaction" rating in the first quarter of his term (per cent satisfied minus per cent dissatisfied) was 64 per cent (rounded off), or "very good" in the SWS classification system.

The score was slightly highly than previous presidents at roughly the same time in their respective terms: Benigno Aquino III at 60 per cent, Joseph Estrada at 60 per cent, Corazon Aquino at 53 per cent, and Mrs Gloria Arroyo at 24 per cent. 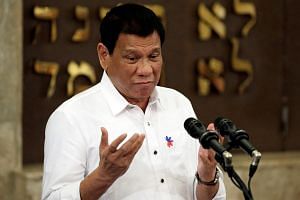 Women unlikely to be attracted to me, laments Duterte in rare moment of self-doubt

Only Fidel Ramos received a higher net rating than Mr Duterte, with 66 per cent.

SWS found that Mr Duterte, the first president from the Mindanao, enjoyed "excellent" support in the southern province, with 88 per cent satisfied and only 4 per cent dissatisfied, for a net satisfaction of 85 per cent, rounded off.

He earned "very good" net ratings in the other major geographical blocs: 62 per cent in the Visayas, 58 per cent in Metro Manila, 57 per cent in "balance Luzon."

The SWS noted that another survey it conducted on June 24 to 27 measured the President's net trust rating at an "excellent" 79 per cent.

Pulse Asia, the other major survey organization, estimated President Duterte's trust rating at 91 per cent, as determined by its survey conducted from July 2 to 8, or just days after the presidential inauguration.