Malaysia's electoral reform group Bersih is holding its street rally in Kuala Lumpur this Saturday, but the gathering is coming up against the triple challenges of political fatigue, a violent confrontation promised by a pro-Umno group, and an annual rock concert by big-name international bands including Third Eye Blind.

Fuelled by the massive turnout at its previous four street rallies in previous years, the upcoming protest is dubbed Bersih 5, with organisers visiting the rural heartland and Malay urban estates to persuade more of them to turn up.

Last year's protest attracted about 50,000 people who were mostly Malaysian Chinese, starkly underlining the country's current political divide with many Chinese supporting the opposition and Malays backing the ruling coalition led by Umno.

Like Bersih 4, the upcoming demonstration aims to protest against the leadership of Prime Minister Najib Razak, who faces a financial scandal involving state fund 1Malaysia Development Berhad (1MDB) that he oversaw from its founding in 2009 to May this year. 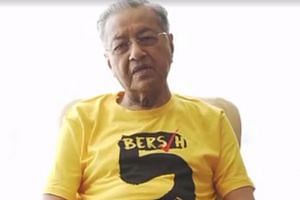 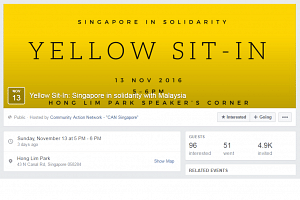 Many urbanites interviewed cast doubt that the protest could achieve the same success it saw last year.

"Nothing changed after the rallies. I don't see a 'what's next' once the protest is over," said Ms Audrey Goo, 35, a business development manager.

Mr Najib is still holding on to his prime ministership and, if anything, it is the opposition that is in disarray.

There is also the emergence of a group called Red Shirts, led by Umno division leader Jamal Yunos.

The ragtag band has fuelled small clashes during Bersih's visits to the heartland nationwide, raising fears that the group could appear on Saturday to ignite physical violence.

"There'll be big trouble if Jamal can bring in a crowd of several thousand. It'll be a face-off with Bersih," said University of Tasmania Asia Institute director James Chin .

Mr Jamal claimed that he will bring 300,000 Red Shirt supporters to counter Bersih 5.

"The Red Shirts will start when the Yellow Shirts start. We will stop when they stop," he told a news conference.

Police chief Khalid Abu Bakar issued a warning on Tuesday that the authorities would take action against those breaking the law by gathering in Kuala Lumpur.

Bersih has failed to obtain a police permit to host its rally, rendering its gathering an illegal activity under Malaysia's legislation.

Malaysia's youth, which made up the bulk of last year's rally, have another dilemma.

They are caught between attending the annual rock festival and Bersih's rally.

The concert's line-up include A-list bands from the United States, Third Eye Blind and Taking Back Sunday, and a reunion performance by renowned local band Butterfingers.

On social media, Malaysians were quick to give the concert precedence over the protest.

"Bye bye Bersih, I am going for the concert. Bersih has a rally every two to three years. Butterfingers and Third Eye Blind is once in a lifetime," posted Mr Azril Annuar.

"We had a group of 10 friends planning to go, but now there're only three," said bank manager Nur Afifah Mohamaddiah. "There's a sense of helplessness now, that nothing we do would change status quo."