JAKARTA • Three people were killed - including two Malaysian tourists - and some 182 others injured after an earthquake on Sunday triggered a landslide on the Indonesian tourist island of Lombok, next to Bali.

The 5.5-magnitude quake is thought to have caused the landslide at the Tiu Kelep waterfall in the north of the island.

Fourteen other Malaysians who were on the island, which is part of Indonesia's West Nusa Tenggara province, were expected to return to Kuala Lumpur yesterday evening, Bernama news agency reported.

The third person killed, an Indonesian, has not been identified.

The two Malaysians who died were from a group of 28 Malaysians who arrived in Lombok last Thursday. Twenty-two of them were visiting the waterfall, located at the foot of a mountain, when the quake hit at about 2.07pm local time.

Ms Tai's son, who was with her when the incident took place, suffered minor injuries and is said to be getting treatment at a hospital.

China Press newspaper reported that Ms Tai, 56, the wife of its editor-in-chief Datuk Teoh Yang Khoon, was in Lombok with her former classmates from a Chinese school in Johor.

Sin Chew Daily executive reporter E Met Yeat said Ms Tai, whom she had known for more than 15 years, was a helpful and caring superior.

"Shocking news. It is difficult for me to accept it," she said. 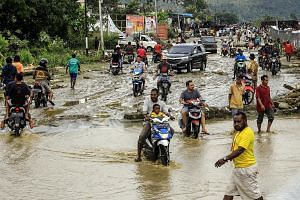 Lombok island is undergoing reconstruction and rehabilitation after a series of strong earthquakes last year which killed more than 500 people and left over 150,000 homeless.

Indonesia, which is prone to natural disasters, was hit by an earthquake and tsunami in Palu on Sulawesi island last September that killed around 2,200 people.

The South-east Asian archipelago of some 17,000 islands is one of the most disaster-prone nations on earth. It straddles the Pacific Ring of Fire, where tectonic plates collide. Earthquakes and volcanic eruptions are common.