Unless resolved soon, questions over 1MDB's dealings are set to have major repercussions

Malaysia's international financial standing took its worst beating in years this week when the Abu Dhabi government declared that state-owned 1Malaysia Development Berhad (1MDB) was in default of billions of dollars in debt obligations.

But as the murky details behind this debt default become clear, concerns are starting to grow over the financial health of Abu Dhabi's freewheeling state-owned entities, such as the International Petroleum Investment Company (IPIC) and its subsidiary Aabar Investments PJS.

Unless resolved soon, the questions over 1MDB's international dealings are set to have major repercussions on the resource-dependent economies of both countries, which are struggling with slumping oil revenues.

In the immediate term, IPIC's declaration of default against 1MDB throws into limbo a US$3.5 billion (S$4.7 billion) international bond the Malaysian fund raised in May 2012. The default threatens to trigger cross-defaults on 1MDB's other borrowings, which currently stand at US$5.1 billion. 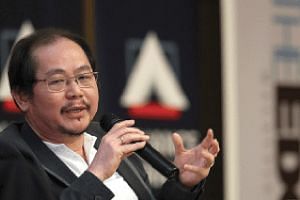 The issue will also affect the sovereign wealth funds of Abu Dhabi, which is eager to tap international bond markets as a source of new funding for economic development.

The dispute between the two state investors burst into the open this week when IPIC declared the default on grounds that 1MDB and the Malaysian government had failed to meet obligations under their financial assistance arrangement and honour payments of "US$1.1 billion plus interest" that were due at the end of last year.

It marked the first time since independence in 1957 that a Malaysian government-owned entity had been labelled a defaulter on the global financial stage. The last time Malaysia attracted near pariah status was in September 1998 when then Prime Minister Mahathir Mohamad imposed currency controls to protect the Malaysian economy against currency speculators and sacked his deputy Anwar Ibrahim.

As reported earlier, the feud between IPIC and 1MDB revolves around fund transfers of roughly US$3.54 billion 1MDB says it made to units of IPIC under obligation of the May 2012 bond agreement. But IPIC declared last week that it never received the money. That move brought into focus a US$50 million instalment payment on the 1MDB bonds which had been due on Tuesday and which IPIC must honour under their agreement.

According to financial executives close to the situation, both parties have about a week under what is called a "cure period" to remedy the default.

Unless that takes place, Malaysia must brace itself for fallout, particularly over 1MDB's other borrowings guaranteed by Prime Minister Najib Razak's administration that could also be declared in default.

Malaysian government officials insist that the aftershocks from this week's declaration of default are manageable. Of the US$5.1 billion in outstanding debts in 1MDB's books, US$2.1 billion is denominated in the local currency, the ringgit, and the remainder in US dollars under a US$3 billion bond issue that is due in 2023.

Malaysia is confident of convincing its domestic lenders who are owed the ringgit-denominated debt not to declare a default on those borrowings. But government officials acknowledge that bondholders of the US-dollar debt are likely to be less forgiving and could insist on early repayment.

Under such a scenario, Malaysia will need to refinance the bond with another loan, which will amount to about RM11.6 billion (S$4 billion) based on the current exchange rate. That is roughly two per cent of the Malaysian central government debt, which Najib administration officials say can be arranged without any complications.

The debt default saga is also putting Abu Dhabi and IPIC, which is Abu Dhabi's second-largest wealth fund, under scrutiny.

Financial executives with close dealings in the Gulf say that slumping oil revenues have forced Abu Dhabi's rulers to review the management of its sovereign wealth funds. Ongoing audits into several of the funds have tossed up numerous red flags, forcing the Abu Dhabi government to suspend all new financial transactions until the various investigations and reports are finalised.