With twists and turns worthy of a thriller, the 1MDB scandal now rocking Malaysia seems unlikely to be unravelled soon, putting the economy on the back foot

In 2008, a then unknown young businessman named Low Taek Jho helped Terengganu set up an investment fund to grow its oil revenue.

The state authorities soon had second thoughts about it, so the Terengganu Investment Authority was taken over by Prime Minister Najib Razak. Keen to give it a title that would confer greater stature and national status, he renamed it 1Malaysia Development Berhad (1MDB).

Six years on, 1MDB has become a household name and generated international attention, but for all the wrong reasons. Questions about its eye-popping debts have metastasised into a massive political crisis that threatens Datuk Seri Najib's leadership, has fractured his ruling Umno party and calls into question Malaysia's financial management. The scandal has also spawned several probes at home and abroad.

It has led to a crackdown on the media, resulted in the arrests of four people, and kept Malaysians captivated for close to a year with its twists and turns involving an improbable cast that includes a pugnacious 90-year-old former premier, a respected central banker and a tattooed man in a Thai jail.

How did a visionary plan by Mr Najib, 62, to expand Malaysia's wealth end up in such a quagmire?

The first murmurs of disquiet began as early as April 2009. A report in The Straits Times then had a chief executive of a Malaysian bank voicing his unease at how the fund had to borrow money to buy assets, instead of using cash surpluses like other state-backed entities.

"To turn in a profit, the fund must ensure a return higher than the cost of its borrowing, and there will be the pressure to go into risky investments to get better returns," the unnamed bank CEO had said.

1MDB is today saddled with debts of nearly RM42 billion (S$15 billion). Questions about its joint ventures, pricey asset purchases and the high interest rates of bonds to pay for its corporate moves are the subject of several probes, including one by a special task force comprising senior government officials.

Following the money trail is frustrating. The Malaysian Parliament's Public Accounts Committee has complained of stonewalling by the Finance Ministry, while forensic accounting is a complex exercise even without questions of possible tampering with evidence.

For many Malaysians, the fundamental problem is neatly summarised by former premier Mahathir Mohamad, a harsh critic of 1MDB and Mr Najib: "It is not a national wealth fund. How can you be rich if you borrow money?

"If you borrow some money from a chettiar (moneylender), would you count yourself rich?"

A big chunk of the fund's huge debts comes from the purchase of 13 power plants in six countries, including Malaysia, for RM18 billion - a price tag which investment analysts say is way too high.

1MDB, in response, often says that it is not worried as it has RM51.4 billion worth of assets.

To pare down its debts, the fund wants to sell the five Malaysian and eight international power plants for between RM14 billion and RM18 billion, after abandoning a plan to list these assets.

1MDB also has several big tracts of land injected into it at low prices by the Finance Ministry.

One plot is 28ha in size and sits at the edge of the Bukit Bintang shopping district in Kuala Lumpur. 1MDB wants to build the Tun Razak Exchange (TRX) financial centre there - the project is named after Mr Najib's father, Tun Razak Hussein, who was the second prime minister. Another plot, on 200ha of land, is located at the southern corner of downtown Kuala Lumpur. Named Bandar Malaysia, the township project will house the KL terminus for the planned high-speed rail from Singapore.

"If I am a rich man, I would buy land at the prime area because I know the value in 20 years."

1MDB's poor financial health was not something that gripped the public's attention initially, but a game changer came in February when the New York Times (NYT) spotlighted the high-living duo of 33-year-old Jho Low - what businessman Low Taek Jho is better known as - and his friend Riza Aziz, described as a "junior-level banker". Mr Riza is the son of Mr Najib's wife, Datin Seri Rosmah Mansor, 63, from her previous marriage.

Mr Riza, not yet 40, co-founded Red Granite Pictures which financed several movies, including The Wolf Of Wall Street.

In response to questions from NYT about how Mr Riza's lifestyle was funded, the Prime Minister's Office replied that their wealth came from "legacy family assets".

Soon after, Mr Najib's four brothers issued a joint statement to say that their father, former premier Tun Razak, was known for his "frugality and utmost integrity".

"We take issue with anyone who taints his memory, whatever the motive," said the statement signed by brothers Nazir, Johari, Nizam and Nazim. Datuk Seri Nazir, 48, chairman of CIMB Group which owns Malaysia's second-largest lender, has since become an open critic of Mr Najib's policies.

But far more damaging for Mr Najib is the war waged by Tun Dr Mahathir, 90. He demanded answers, splitting Umno and calling into question Mr Najib's hold on the party. Speculation about party coup plots and Umno elders forcing Mr Najib to step down continues to swirl. Given his respected status in Umno, Dr Mahathir's direct manner in attacking Mr Najib shocked the party.

Early this month, Dr Mahathir wrote in his blog: "The person who has shamed the country is Najib and his 1MDB. Before this, the country was never ridiculed like this, with such allegations that remain unanswered until now."

"This is because all the main newspapers in Washington, New York and London have written lengthy pieces up to four pages long on the 1MDB scandal, Najib and his lavish lifestyle, and his close friend Jho Low and his stepson Riza Aziz that funded the obscene movie, The Wolf Of Wall Street."

NOT FOR 'PERSONAL GAIN'

Things turned even darker for Mr Najib this month, when the Wall Street Journal (WSJ) alleged that US$700 million (S$961 million) had been deposited into his personal accounts.

Mr Najib's response was that he never took any funds for "personal gain". But he did not clarify whether the money did flow into his accounts at domestic lender AmBank between March 2013 and February this year.

In a follow-up article, WSJ said that Singapore police and the Malaysian central bank studied some US$529 million in accounts belonging to Mr Low, after Bank Negara in March asked for Singapore's help in its 1MDB probe. Mr Low has consistently denied he was involved in the state investor except providing some early advice in 2009.

The story took another turn when a tattooed Swiss national Xavier Andre Justo, a former executive at an early joint-venture partner of 1MDB, was nabbed by Thai police in Koh Samui.

Thai police said he was trying to blackmail his former company, PetroSaudi International. Justo later admitted to passing gigabytes of data to The Edge media group and Sarawak Report website.

The task force has surprised Malaysians by targeting the media which had been exposing the scandal, and imposing travel bans on several opposition leaders and political activists critical of the issue. 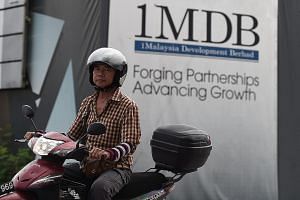 Mr Nazir, Mr Najib's brother, said on his Instagram on Friday that The Edge's "recent 1MDB coverage seems outstanding but if there were flaws then correct them or take legal recourse. I condemn the suspension".

Amid the almost daily new allegations and disclosures, one thing everyone can agree upon is that the government must quickly conclude its investigations, as it cannot afford to be distracted by the scandal at a time when the Malaysian economy is weakening, the ringgit sliding and cost of living soaring.

- It claims that its audited assets of RM51 billion justify liabilities of even up to RM49 billion.

- It owns five power plants in Malaysia and eight more plants in five other countries.

- A little known Saudi company that went into a joint venture with 1MDB in 2009 by injecting a  Turkmenistan oilfield while the Malaysian company contributed US$1 billion (US$ 1.37 billion) in cash. However, the venture never took off and 1MDB's equity was converted into a loan within six months.

- Over the next two years, PetroSaudi borrowed another US$830 million from 1MDB before handing it back in September 2012. The latter invested the money into a Cayman Islands investment fund, with about US$1.1 billion in "fund units" being held in an account at the Singaporean branch of Swiss bank BSI.

-  Once a 1MDB subsidiary, it borrowed RM4 billion from the national pension fund in 2011. SRC later became a wholly-owned Finance Ministry company, after which it failed to file annual accounts, leading to allegations that the loan was not repaid.

-  The Wall Street Journal (WSJ) newspaper has alleged that RM42 million from SRC International was moved via several intermediate companies before being deposited into Prime Minister Najib Razak's accounts.

- The WSJ has alleged that US$681 million from a British Virgin Islands company was transferred to Mr Najib's accounts just two months before Malaysia's May 2013 general election, via Falcon's Singapore branch.

-  It was previously known as Arab-Malaysian Bank. Its largest single shareholder is the Australia and New Zealand Banking Group.

-  WSJ has alleged that nearly US$700 million flowed into Mr Najib's accounts in AmBank in Malaysia.

A version of this article appeared in the print edition of The Straits Times on July 25, 2015, with the headline 'A tale of debt, money trails and allegations '. Subscribe
Topics:
More
Whatsapp Linkedin FB Messenger Telegram Reddit WeChat Pinterest Print Purchase Article Copy permalink