$4.7b bond raised by 1MDB thrown into limbo as KL-Abu Dhabi row escalates

The declaration by Abu Dhabi's International Petroleum Investment Company, or IPIC, against 1MDB immediately throws into limbo a complex US$3.5 billion (S$4.7 billion) international bond the Malaysian fund raised in May 2012 with full, iron-clad guarantees from the tiny oil-rich emirate's business entities.

And because of the protracted nature of the disagreement, financial executives tracking developments in the bitter feud say that international investors, who subscribed to the bonds that were arranged by international banking group Goldman Sachs, may have to wait a long time before they are compensated. "This is going to be tied up (in legal fights). Neither party is going to step up to settle with bondholders because they are holding on to two very different interpretations of agreements and events," said a senior chief executive of a Malaysian-based financial institution, who has had dealings with 1MDB and IPIC.

As reported by The Straits Times yesterday, the feud between the two state investors revolves around fund transfers of roughly US$3.54 billion that 1MDB says it made to units of IPIC under obligation of the May 2012 bond agreement. 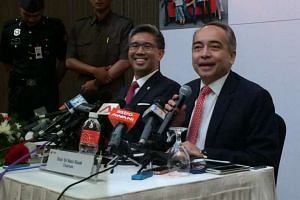 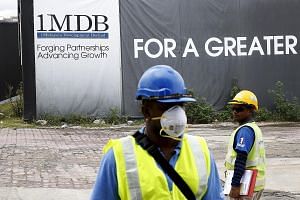 1MDB: Missing cash may derail plan to write off debt 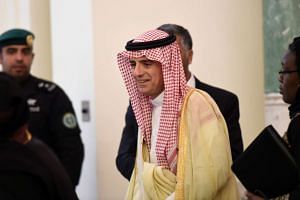 But IPIC declared last week that it never received the money. That move quickly brought into focus a US$50 million instalment payment on the 1MDB bonds, which falls due at noon today and monies IPIC must honour under the bond agreement.

In a filing to the London Stock Exchange yesterday, IPIC made no mention of the US$50 million payment. It said that it had declared a default on grounds that 1MDB and the Malaysian government had failed to meet obligations under the financial assistance plan and honour payments of "US$1.1 billion plus interest" that were now in default.

The Abu Dhabi fund noted that it "was now considering all its options to remedy the default, including referring the matter to the appropriate dispute resolution forum".

1MDB issued an equally forceful statement, declaring that under an agreement in early June last year, IPIC promised to honour all interest payments under the bond agreement in exchange "for certain undertakings to transfer assets and cash to IPIC". 1MDB added that a "dispute has arisen" over obligations that both parties must honour under the agreement and "understands that IPIC has not paid the interest".

In clear reference that it would be challenging IPIC's declaration of default, 1MDB said it wished to "make clear that it and its group entities would meet all of their obligations under any other financing arrangements". Just hours before IPIC's default declaration today, 1MDB issued a separate statement claiming it stood on solid financial ground, noting that it had repaid all its bank debt and held cash surpluses of around RM2.3 billion (S$800 million).

But there are serious implications for the Malaysian government in the feud. 1MDB senior management had advised Prime Minister Najib Razak that a default on the US$3.5 billion bond issue was likely to trigger so-called cross-defaults on the fund's other commitments, which stand at about US$5.1 billion.

Where did the billions go?