KUALA LUMPUR • Malaysia's troubled state investment fund, which is facing the risk of a bond default, said yesterday it expects an interest payment to be made to its bondholders, though it is unclear which company would make the payment.

1Malaysia Development Berhad (1MDB) has enough cash to pay the US$50 million (S$66.8 million) of interest that was due on Monday, and in fact its surplus is 11 times that amount should it decide to make the payment, its president Arul Kanda Kandasamy said in a Bloomberg Television Malaysia interview.

But it is Abu Dhabi's sovereign wealth fund, the International Petroleum Investment Company (IPIC) - which had earlier agreed to pay interest on the bonds - that should be making the payment, he said.

1MDB is in the midst of a dispute with IPIC but Mr Arul Kanda said he expects an "amicable resolution".

The bond has a five-day grace period for payment. 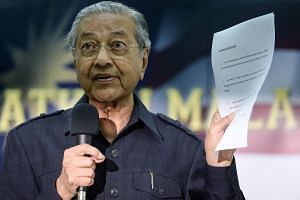 The threat of default is the latest episode in financial scandals that have rocked 1MDB, already a target of global probes into allegations of money laundering and embezzlement.

"It is important to maintain a sense of perspective here," Mr Arul Kanda said. "We are in direct contact with IPIC and we are seeking to work through these differences to come to a resolution."

IPIC entered into an agreement with 1MDB in 2012 where it would provide the Malaysian fund with US$1 billion to settle some liabilities in exchange for a transfer of assets, as well as assume interest obligations on US$3.5 billion of debt.

1MDB was supposed to repay the loan through an IPIC subsidiary, but IPIC last week revealed for the first time that it never received the money.

On Monday, the Abu Dhabi fund said 1MDB and its shareholder, Malaysia's Finance Ministry, "are in default" on the terms of their deal and have failed to honour payments of "US$1.1 billion plus interest".

"It is always open to us to settle that issue should we decide at the right time to do so," Mr Arul Kanda said of the interest payments due to bondholders.

Malaysia's Finance Ministry said on Monday that it would "continue to honour all of its outstanding commitments", fuelling speculation of a 1MDB bailout that Prime Minister Najib Razak had vowed would never happen.

Datuk Seri Najib heads 1MDB's advisory board and oversaw its creation in 2009. He has faced calls to step down over allegations of graft and mismanagement at the fund.

"We now know clearly that with the spectacular failure of the (IPIC) deal, the Malaysian taxpayers will be called upon to foot 1MDB's bills," opposition lawmaker Tony Pua declared yesterday.

Any bailout could further pressure Malaysian finances amid plummeting oil revenues, slowing growth and concerns over the country's fiscal position, which last year caused the ringgit to plunge.

"The government wouldn't want to risk having a default on its books, so if it came down to it, they would want to keep a clean record," said Ms Krystal Tan, a Singapore-based economist at research firm Capital Economics, talking about the risk of a bailout for 1MDB.

"It's a bigger problem for Najib now because this is clearly in his hands now," he said.