Troubled Malaysian state investment firm 1Malaysia Development Berhad (1MDB) has claimed that it could have been a victim of fraud in a deal it made with a Middle Eastern firm to purchase power plants.

"Given the recent denial by IPIC and the announcement by the Office of the Attorney-General of Switzerland, indicating that 1MDB could be a victim of fraud, 1MDB is exploring all avenues open to us," Mr Arul Kanda said in a statement yesterday. 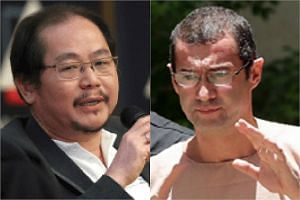 He was referring to a sum of US$3.5 billion (S$4.7 billion) transferred by 1MDB to a British Virgin Islands-registered firm named Aabar Investments PJS Ltd (Aabar BVI). 1MDB had earlier maintained that as far as it was aware, Aabar BVI was a subsidiary of IPIC.

Mr Arul Kanda also denied being aware that Aabar BVI had been liquidated until it was published in recent press reports that the company was wound up in June last year.

On Monday, IPIC and its subsidiary Aabar Investments PJS (Aabar) issued a statement to the London Stock Exchange saying Aabar BVI "was not an entity within either corporate group", that is, IPIC or Aabar.

The Swiss authorities had said it was investigating suspicious cash flows linked to 1MDB and that the monies paid by 1MDB in connection with the power plants deal had not reached IPIC but benefited a former 1MDB body, two public officials and a company related to the motion picture industry.

Red Granite, a Hollywood movie production firm owned by Malaysian Prime Minister Najib Razak's stepson Riza Aziz, reported by the Wall Street Journal as one of the beneficiaries, denied having been involved in any "inappropriate" activity.

Datuk Mohamad Hafarizam Harun said Mr Najib's signing of the firm's documents, in fulfilling an internal regulation, did not mean he was the final decision maker.

"When decisions have been made (by the 1MDB board), and when they need to formalise it by signing, they refer to the person stated in Article 117 to sign."

Article 117 in 1MDB's Memorandum and Articles of Association stipulates that all financial commitments, including substantial investments, require the written approval of the Prime Minister.

Mr Mohamad Hafarizam also questioned whether foreign authorities had extra-territorial jurisdiction to charge Malaysian citizens in probes related to 1MDB, including in Switzerland and Singapore.

"The question is whether any Malaysian, including the Prime Minister, can be brought to the courts of justice in other countries? Unless they submit themselves to these (foreign) jurisdictions," he told The Straits Times.

A High Court yesterday rejected an application by a former member of the ruling party Umno, Khairuddin Hassan, to set aside criminal charges against him for lodging reports abroad against 1MDB.

A version of this article appeared in the print edition of The Straits Times on April 14, 2016, with the headline '1MDB 'could have been victim of fraud in Mid-East deal''. Subscribe
Topics:
More
Whatsapp Linkedin FB Messenger Telegram Reddit WeChat Pinterest Print Purchase Article Copy permalink