Malaysia is keen to reach a settlement with Abu Dhabi's sovereign wealth fund over a US$6.5 billion (S$8.7 billion) dispute with 1Malaysia Development Berhad (1MDB), as the stand-off heads into arbitration next month.

The stand-off over a debt asset swap between the two state funds forms part of a financial scandal engulfing Prime Minister Najib Razak that led to calls for him to resign.

"It doesn't look good for two countries to fight over a business transaction. This is all about getting two parties to sit down and discuss and thrash out whatever differences that we have," Datuk Johari said in the interview.

1MDB signed a debt asset swap deal with IPIC in May last year, but the Emirati firm claimed in April that 1MDB has not repaid a US$1 billion advance and applied for arbitration in London, where it is publicly listed. 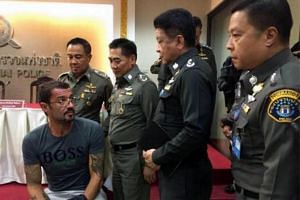 Mr Johari said his ministry, which owns 1MDB and provided indemnity on the deal, is "trying to see if we can settle this amicably".

Reaching a settlement would prevent the matter - which goes into case management next month - from dragging on. Seventy per cent of cases at the London Court of Arbitration take more than 18 months to resolve.

Mr Johari, who joined the Cabinet in June, said: "You must get the complete story, then only can you see whether there is any negligence."

Meanwhile, even as the 1MDB scandal has cast a shadow on Malaysia's economy in the past two years, South-east Asia's third largest economy is facing headwinds from the crash in oil prices.

With economic growth slowing, Mr Johari said the Finance Ministry will divest some state-owned enterprises in a bid to rein in the fiscal deficit and keep government debt in check.

"We are looking at all these companies to see their relevance in the government stable. Companies we need to keep for social reasons, we will keep, but we cannot run away from efficiency, productivity, governance and good management."

Meanwhile, loss-making national railway company Keretapi Tanah Melayu has been widely speculated to be a takeover target of tycoon Syed Mokhtar Albukhary, to form synergies with his ports and logistics divisions.

Malaysia's public debt stood at RM630.5 billion (S$212 billion) at the end of last year, or 54.5 per cent of gross domestic product, just shy of a self-imposed 55 per cent ceiling which the government has vowed not to breach.

To reduce debt, the government did away with a huge subsidy Bill and imposed an unpopular 6 per cent goods and services tax on all consumption.

But the loss of over two-thirds of oil's value since mid-2014 - when oil prices cruised at well over US$100 per barrel - has wreaked havoc with government revenue.

Several reports from research houses, including Nomura and RHB, expect economic growth to cool from the first quarter's 4.2 per cent - the lowest in three years - to 3.9 per cent for the year.