PASIR GUDANG • More than 100 students in Pasir Gudang, Johor, suffered breathing difficulties and nausea yesterday, just hours after their schools reopened after being closed last week due to an air pollution incident.

Johor Health, Culture and Heritage Committee chairman Mohd Khuzzan Abu Bakar said at least 130 students were found to have experienced breathing difficulties and nausea, but after screening, only 30 people, including three teachers, were referred to health clinics, reported the Malay Mail.

Classes, however, would continue, as air quality readings were at normal levels, Mr Mohd Khuzzan said.

"We will move students whose classrooms are at higher floors to a lower level, as most students who experienced symptoms today are from the third and fourth floors," he said, as quoted by The Star.

He said agencies like the Pasir Gudang Emergency Mutual Aid (Pagema) and the Department of Environment would continue to monitor the air quality around Pasir Gudang.

A total of 475 educational institutions, including 111 schools, in Pasir Gudang were closed for three days from last Tuesday due to air pollution. Schools in Johor observe the weekend on Fridays and Saturdays. 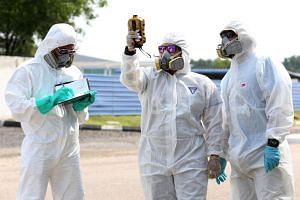 The recent air pollution incident, which was discovered on June 20, caused more than 100 students from over 30 schools to fall ill last week. Officials have yet to determine the cause of the air pollution and the students' symptoms.

This was the second time in three months that the authorities had ordered all schools in Pasir Gudang district to be closed.

In March, schools were closed when thousands were overcome by toxic fumes from Sungai Kim Kim after chemicals were illegally dumped into the river.

Four individuals, including two Singaporeans, have been charged in the Sessions Court for their involvement in the dumping. Three of them are directors of a used tyre processing company and the other is a lorry driver.

In the latest incident, the authorities are believed to have narrowed down the list of suspected polluters to 30 chemical factories. Johor Menteri Besar Sahruddin Jamal said he had directed the Department of Environment and other agencies to find the main culprit.

Three types of flammable and toxic gases had been detected in the area - methyl mercaptan, acrylonitrile and acrolein.

Malaysian Prime Minister Mahathir Mohamad had described the incident as "unfortunate", saying it should not have happened, especially since the Sungai Kim Kim incident occurred just three months ago.

The state government had reportedly spent RM6.4 million (S$2.1 million) cleaning up the toxic waste in the river.

Johor ruler Sultan Ibrahim Sultan Iskandar said last week that he would propose to the Johor government to "get rid of or relocate" industries that had negative environmental impact on the state, saying that "they endangered not just the people of Johor but also Singaporeans".