Health authorities in Indonesia, Malaysia and S'pore say the numbers do not reflect reality

Health authorities have rejected the findings of a US-led study that estimated about 100,000 people in Indonesia, Malaysia and Singapore died prematurely from cardiovascular and respiratory illnesses related to last year's record haze crisis.

Singapore's Ministry of Health said the study by Harvard University and Columbia University, which was published yesterday in the journal Environmental Research Letters, "is not reflective of the actual situation".

The study was restricted to premature deaths in adults from having inhaled very fine particles in the air known as PM2.5.

Dr Jim Teo, a respiratory physician at Mt Alvernia Hospital in Singapore, said the estimate was "possible" as many vulnerable patients, especially those with chronic heart and lung conditions, have had more serious symptoms during the haze.

But other experts in Singapore told The Straits Times that while exposure to high levels of PM2.5 could lead to diseases and early deaths, they said the figures in the study did not reflect what happened.

Dr Ong Kian Chung, a respiratory specialist at Mount Elizabeth Hospital, said the data is "certainly useful as such information is currently lacking, especially for this region", but felt that the figure for Singapore might be "too high" based on his experience, as well as that of his colleagues in Singapore last year.

"The majority of the problems faced by their patients during the haze period last year might have been serious but were not life-threatening," he said. 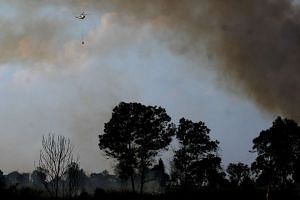 Environmental engineer Rajasekhar Balasubramanian from the National University of Singapore said it was a "preliminary study" which called for more research to understand the complex air pollutant mixtures in Indonesia, Singapore and Malaysia.

Researchers arrived at the latest findings by using fire and pollution data from last year's crisis and knowledge of the health effects from airborne particles. The data included estimates of smoke emissions observed from satellites. The researchers used a model to track the "fate" of the smoke in the atmosphere.

"The 'fate' of the smoke - meaning once the smoke comes out of the fires, how do the chemical compounds in the smoke change as they move through space and time before they reach people," Dr Samuel Myers, senior research scientist at Harvard School of Public Health and one of the study's authors, told The Straits Times. "If you know that, you can estimate the concentration of fine particles (PM 2.5) that people are breathing. And if you know that, you can estimate the health impacts."

The findings far exceeded Indonesia's official death count of 19 people. The Health Ministry's director-general of prevention for disease control, Mr Mohamad Subuh, said: "I'm not sure these figures describe the real situation. If it's only a statistical count, I don't think it is appropriate to conclude such a huge death toll."

Mr Yuyun Indradi, forest campaigner with Greenpeace Indonesia, said the number is "alarming but not surprising" and called for the government to end haze-causing forest fires.