YANGON • One hundred days after the military seized power in Myanmar, the nun who pleaded for protesters on her knees in the street says the coup has cast a pall of fear and depression over the country.

The image of Sister Ann Rose Nu Tawng kneeling in the dust, arms spread, begging police not to shoot "the children" went viral in March as an uprising swelled in Myanmar.

The 45-year-old nun now works in a clinic in Myanmar's northern-most Kachin state, tending to patients injured by security forces, sickened from stress, and even those who try to kill themselves.

"With the consequences of the Covid-19 pandemic and brutal actions of the military, there are more people who feel depressed and want to commit suicide," she told Agence France-Presse. "People are living in fear and they feel hopeless."

Today marks 100 days since the generals made their lightning power grab in the early morning of Feb 1, ousting and detaining civilian leader Aung San Suu Kyi.

The period has seen Myanmar plunge into chaos as the army struggles to control widespread opposition to its rule.

Around 780 civilians have been killed, according to a local monitoring group, as security forces have sought to suppress near-daily protests with brutal crackdowns and live rounds.

As at yesterday, more than 11,000 academics and other university employees had been suspended after going on strike in protest against military rule, a teachers' group said.

Meanwhile, a judge has ordered Ms Suu Kyi, who has not been seen in public since the coup, to appear in person in court for the first time on May 24, said her lawyer yesterday, after weeks of delays in her case.

Sister Ann Rose Nu Tawng, who was praised for her bravery months ago, said she thinks instead of the youth who are still fighting. "They are sacrificing their lives for their future."

Night after night, soldiers and police raid homes to arrest suspected activists - both protesters and those taking part in the civil disobedience movement that has crippled the state's ability to function.

Despite the dangers, the movement persists, fuelled by a young generation who came of age after the dawn of democracy and the country began opening up a decade ago.

"We want to stand on the right side of history," said a protester in Myanmar's former capital Yangon.

The bloody intensity of the crackdowns has ebbed in recent weeks - partly as demonstrators have switched to flashmob tactics to avoid the risk of being shot. But clashes between the military and ethnic rebel armies in the border regions have intensified.

"It's not going to quiet down," said Yangon-based political analyst Khin Zaw Win. "The regime thinks that everything will be okay by June, but it is a delusion."

The Karen National Union - which is sheltering dissidents fleeing to its territory in the eastern state - has captured military posts and been hit with multiple air strikes in return. Clashes in northern Kachin state have also risen.

A group of ousted lawmakers, who set themselves up as a shadow National Unity Government (NUG), announced the creation of a "people's defence force" to protect civilians from the military.

Although the NUG, whose members are in hiding, has not shown itself able to wield much influence, it was designated as a terrorist group by the junta last Saturday. It has been accused of "bombing, arson, manslaughter and intimidation to disrupt state administrative machinery".

So far, neither calls for restraint nor sanctions by the United States, European Union and Britain have shown signs of deflecting the generals from their chosen course. 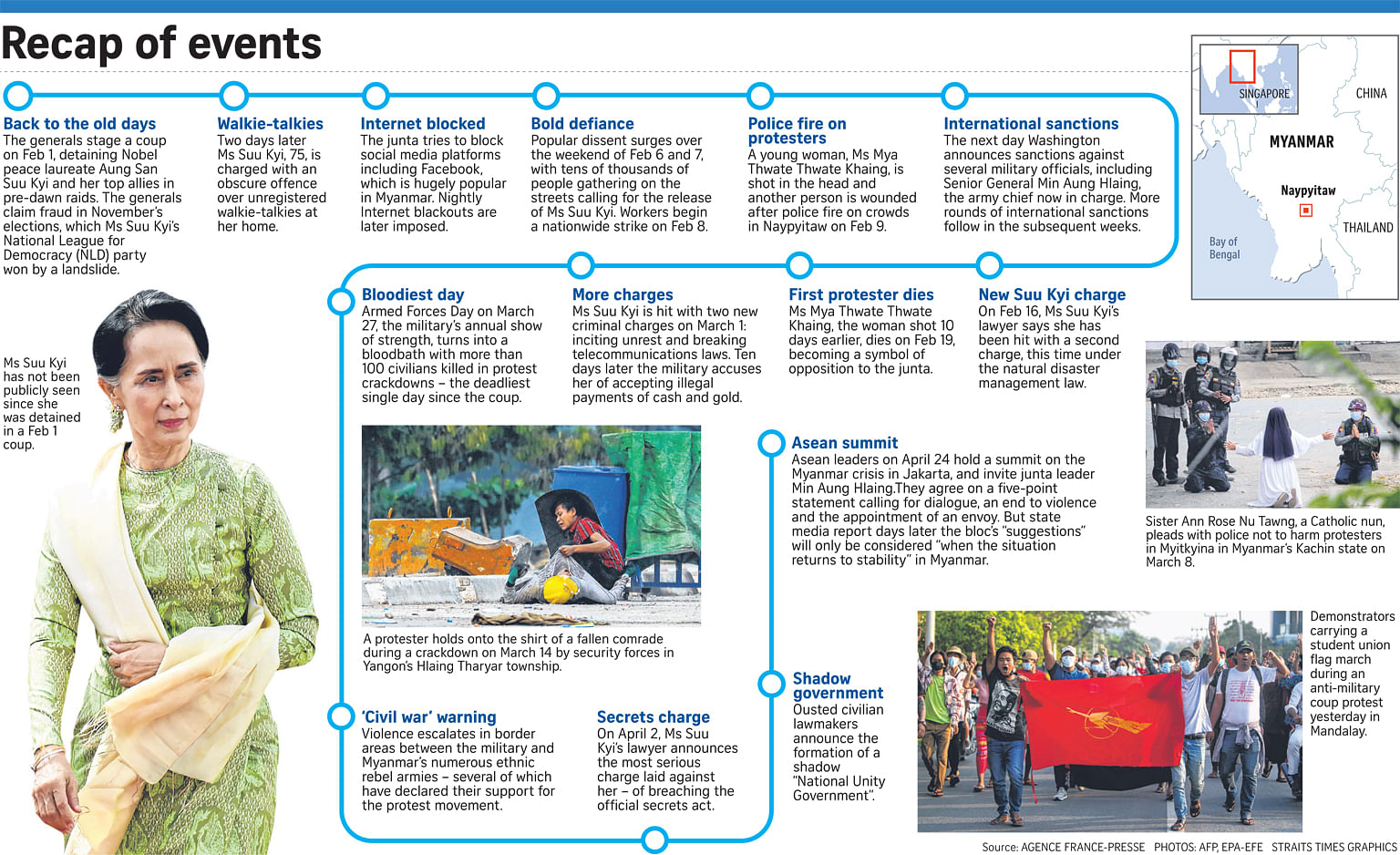 With the consequences of the Covid-19 pandemic and brutal actions of the military, there are more people who feel depressed and want to commit suicide. People are living in fear and they feel hopeless.

SISTER ANN ROSE NU TAWNG,
who went on her knees and begged police not to shoot protesters in March.

An Asean summit last month - attended by junta leader General Min Aung Hlaing - yielded a "five-point consensus" calling for dialogue, an end to violence and the appointment of a special envoy.

But even this limited achievement was undermined days later, when the junta said it would heed "suggestions" only when "the situation returns to stability".

Myanmar's economy - reeling as workers nationwide down tools rather than cooperate under military rule - is expected to contract by a staggering 10 per cent this year, according to the World Bank. And the UN Development Programme has warned that the combined effect of the pandemic and the coup turmoil could see nearly half of the population living in poverty by next year.

A version of this article appeared in the print edition of The Straits Times on May 11, 2021, with the headline '100 days after coup, unrest in Myanmar still palpable'. Subscribe
Topics:
More
Whatsapp Linkedin FB Messenger Telegram Reddit WeChat Pinterest Print Copy permalink