JAKARTA - Emergency sirens to provide early warning to people in the event of a volcanic eruption have been installed around Mount Agung, while plans to divert flights are also being prepared, as authorities in Bali gear up for what is feared to be an imminent eruption of the volcano.​

The number of evacuees have also increased from just under 76,000 on Tuesday, to more than 96,000 on Wednesday (Sept 28), according to an update from Indonesia’s National Disaster Management Agency (BNPB) spokesman Sutopo Purwo Nugroho.

“The number of earthquakes was more than last Tuesday… and magma movement approaching the surface continues, with the chances of an eruption quite high,” said Dr Sutopo. “But it cannot be established when it will erupt with certainty.” 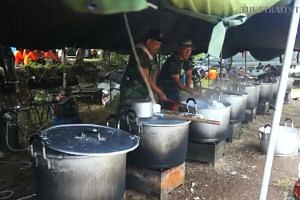 People within a radius of 2km should be able to hear the sirens, which will be manually activated by a duty officer at the BNPB command post in Karangasem regency, where the volcano is located.

The number of evacuees is expected to grow, despite reaching 96,086, spread across 430 shelters in nine different regencies but the basic needs of people seeking shelter are sufficient so far, said Dr Sutopo.

“The Balinese people have been a big help for the evacuees,” he added. “Gotong royong, solidarity and cohesiveness of the community has led to how well the evacuees are being handled.”

In anticipation of an eruption, Indonesia plans to divert flights headed for Bali to ten other airports, said the Ministry of Transportation.

A ministry spokesman said the 10 include airports in the capital Jakarta, as well as Ambon, Balikpapan, Banyuwangi, Kupang, Makassar, Manado, Praya, Solo, and Surabaya.

These will serve as alternative airports for aircraft en route to Ngurah Rai Airport, which will be closed if it was impacted by volcanic ash from Mount Agung, said Transportation Minister Budi Karya Sumadi.

“The flights will be diverted to the nearest location or to where they originated from,” he added.

The minister was speaking to his staff on Tuesday after a meeting with his counterparts at the 4th Asia-Europe Meeting, which is being held in Bali’s capital Denpasar until Thursday.

Denpasar, where Ngurah Rai Airport is located, is about 70km away from Mount Agung. It remains safe, but could be affected if a thick ash cloud follows an eruption, said officials. 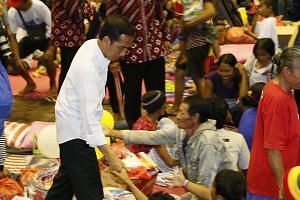 Evacuations from Bali volcano swell to 76,000 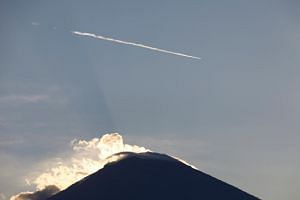 An estimated 5,000 travellers may be affected if the international airport is shut, but the ministry has prepared 100 buses to take passengers to Banyuwangi, Praya or Surabaya, where they can arrange for alternative flights home.

People familiar with the route, including seasoned travellers to Bali, told The Straits Times that if the airport in Denpasar is shut down, travellers can still easily make their way over land and sea to Java where there are many airports to fly out from.

“You can still go by car to Gilimanuk port where you can cross the Bali Strait by ferry to Banyuwangi in East Java,” said Mr Herman Winarto, a diving instructor in Bali.

“From there you can travel by car, bus or train to other destinations in Java, such as Surabaya, Yogyakarta, Bandung, and then catch a flight out of Indonesia from Jakarta.”

Airlines including those from Singapore and Australia are monitoring the situation.

Virgin Australia said it would be making an extra fuel stop in Darwin for some of its flights between Australia and Bali in case it is forced to turn back, reported Agence France-Presse.

Others such as Singapore Airlines, Scoot, AirAsia and Jetstar - have said flights were still operating normally as of Tuesday.

Singapore Airlines said customers travelling between Sept 23 and Oct  2 could re-book flights or ask for a refund.