People rush to offload their 500-rupee and 1,000-rupee notes

Indian petrol stations were swamped yesterday with people keen to spend their 500-rupee (S$10.50) and 1,000-rupee bank- notes, as they reacted to an unexpected government move to scrap the use of these notes.

"Our sales have gone up temporarily. Everybody is coming to us. There were long queues at my petrol station," said Mr Sandeep Khatra, a petrol station owner in the northern state of Punjab. "But it is a pain as we have to maintain records of everyone who is buying until the 11th.

"I have also been getting a lot of calls asking me to exchange the notes. But I said I can't do it."

The rights and the interests of honest, hard-working people will be fully protected.

Petrol stations, hospitals and airports are allowed to accept the devalued notes till the end of tomorrow.

Yesterday, banks and ATMs remained shut to prepare for the exchange of old currency notes.

Long queues also formed at ATMs as people scrambled to get their hands on 100-rupee notes.

Prime Minister Narendra Modi in a surprise announcement on Tuesday night said the government was scrapping the 500-rupee and 1,000-rupee banknotes in a bold move to clamp down on corruption and take out of circulation counterfeit currency used for terror financing.

The high-denomination currency notes would cease to have value by midnight, except at designated places such as petrol stations. New 500-rupee and 2,000-rupee notes will be issued from today. Old notes can be exchanged at banks and post offices over the next 50 days.

The move is designed to bring unaccounted money into the mainstream and to the attention of the tax authorities. Banks have to keep records of everyone who comes in to exchange the demonetised currency for new currency. 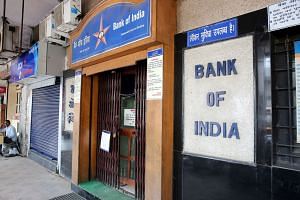 'Black money' will be put out of circulation, tax coffers will rise

Indian citizens in HK and S'pore caught out by move 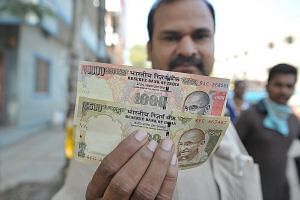 One-quarter of economy unaccounted for

"The 500- and 1,000-rupee notes hoarded by anti-national and anti-social elements will become just worthless pieces of paper. The rights and the interests of honest, hard-working people will be fully protected," said Mr Modi.

Even banks were not given prior notice of the move, with Mr Modi noting this was one way of curbing terror financing following multiple seizures of fake 500-rupee and 1,000-rupee notes over many years.

"Terrorism is a frightening thing... but have you ever thought about how these terrorists get their money? Enemies from across the border have run their operations using fake currency notes," he said.

Terror groups sheltering in Pakistan are believed to be churning out counterfeit money.

Still, in just one indication of how vast the exercise is going to be, 500-rupee notes constitute 45 per cent of all banknotes in circulation, while the 1,000-rupee notes total 39 per cent.

Amid opposition criticism that the move would inconvenience citizens, Finance Minister Arun Jaitley said bank deposits would increase and tax collection would go up, noting: "It pays to be honest."

The sudden move to demonetise the high-denomination banknotes stunned the country, as many of India's poor prefer to keep their savings in cash. In rural areas, many do not have access to banking facilities.

Mr Modi came to power in 2014 vowing to tackle corruption and curb the generation of "black money" or unaccounted money, that forms part of India's shadow economy.