Every year, from Vietnam to Bangladesh, big chunks of the shoreline are lost to the sea; damage and adaptation costs could be significant

Just off the northern shores of the Gulf of Thailand sits a stark reminder of where many parts of Asia, and millions of residents, won't be in a matter of decades.

The Buddhist temple of Wat Khun Samut, now a popular tourist destination, was once a central part of a thriving community, long gone after the sea devoured the coastline. Only the tops of a few buildings still protrude from the rolling waters.

The temple, more than a kilometre out via a concrete pathway, has become a lab for climate-change researchers to check the effects of coastal erosion. 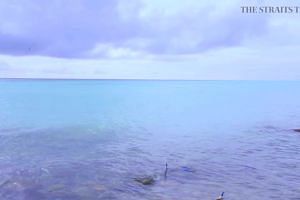 Every year, from Vietnam to Bangladesh, significant chunks of the shoreline are lost to the sea.

In the Gulf of Thailand, almost a third is affected - in some parts, more than 5m of shoreline disappears a year.

To the east, Vietnam's fertile Mekong Delta is particularly vulnerable, with about 40 per cent exposed to the growing risk from rising sea levels triggered by global warming.

Six resorts on Cua Dai Beach in Hoi An could collapse into the advancing sea, according to reports, and two recently completed resorts had not opened because of erosion.

On the coast of Cambodia, Kampot and Kaeb provinces have in recent years seen their coastlines recede up to 200m.

To survive, threatened coastal communities will have to adapt.

"Without adaptation, hundreds of millions will be affected by coastal flooding and displaced due to land loss by 2100; the majority from East, South-east and South Asia," Dr Wong Poh Poh, a visiting professor at the University of Adelaide, said in a paper at a conference in Bangkok recently.

"Some low-lying countries (Bangladesh, Vietnam) and small islands are expected to face high impacts. Associated damage and adaptation costs could be several per cent of GDP," said Dr Wong, a specialist in erosion in coastal regions and small islands.

It's not just climate change and rising seas that are jeopardising future livelihoods and lifestyles.

One reason for the erosion in Hoi An, Vietnamese scientists say, is that dams upstream of the river system have reduced the amount of silt that is washed into the sea - which would otherwise settle back on the shore.

Many coastal zones have been left bare of protective mangrove forest cover, which has been converted to shrimp farms or industry, or even urban infrastructure.

In 2013, National University of Singapore researchers came to the gloomy conclusion that Myanmar's Irrawaddy Delta had lost 51 sq km of its mangrove forests a year, from 1978 to 2011.

The depletion of mangroves has been cited as one reason the storm surge that Cyclone Nargis churned up in 2008 met little resistance as it inundated the delta, killing thousands.

In an echo of Vietnam, in Thailand the upstream dams on rivers that discharge into the sea are also partially to blame; research has shown, for example, that just one, the Kaengkrachan dam, traps more than 65,000 tonnes of sediment every year - much of which, if it reached the Gulf, would settle back on shore and reinforce it.

In Thailand, tapping ground water for the 10 million people in and around Bangkok and industrial needs along the coast are contributing to land subsidence, says Dr Sakanan Plathong, a scientist with the Coral Reef and Benthos Research Unit at Prince of Songkla University in Hat Yai, Thailand.

Much of the Thai capital, built in a river delta, is at or below sea level - and steadily sinking.

The inherent vulnerabilities of living in a dynamic and shifting landscape are complicated by climate change - and not just from sea-level rise but also other factors associated with global warming. 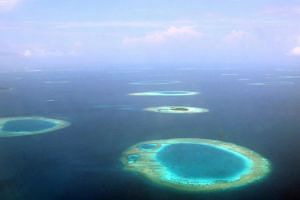 These include shifts in rainfall distribution, more frequent and stronger storms and associated big waves or storm surges, and fields and fresh-water sources being affected by salinity.

Sea-level rise accelerates the erosion in ways that are as yet poorly understood. But the scientific consensus is that the global mean sea level has risen by 10cm to 20cm during the past 100 years.

In the past 20 years, the annual rate has accelerated to 3.2mm - almost double the previous rate.

And the waters of the Gulf of Thailand are rising at the higher end of the range - 3mm to 4mm annually, says Dr Sakanan.

But while barrier works are under way in all the vulnerable countries, they are small-scale and disparate rather than integrated, experts say.

In May, an official from Vietnam's Ministry of Planning and Investment, citing research, was quoted in reports as saying some US$30 billion (S$40 billion) was needed for Vietnam to cope with and adapt to climate change - from 2 per cent to 6 per cent of its average gross domestic product.

But there was also opportunity, Dr Wong said in a telephone interview. "You have to think positively. There may be new types of fisheries or agriculture. We have to increase what we call coastal resilience - the ability of human society to adapt to rising sea levels," he said.

"And also the resilience of the coastal ecosystems - like the mangroves and coastal forests. Of all the phrases now being thrown around, I think coastal resilience underlies everything."

At Wat Khun Samut, the abbot, Phra Somnuek Athipanyo, is both sceptical and phlegmatic.

"The researchers spend two or three hours a day here. We live here all the time," he told The Straits Times, standing on a parapet of the compound, with the insistent brown water of the Gulf below lapping and sucking at a jumble of old concrete electricity poles set up as a breakwater.

"Sometimes I think all these researchers are dreamers," he said.

"They come with theories that they are going to reclaim the land. All these people spend time in classrooms.

"For us, we know what works and what does not. I think the best you can do is protect this place so that it doesn't get worse. The currents are very strong.

"We really need a 10km dyke here. It will cost millions of baht. So we are building our own small one, little by little.

"Instead of using money on research, they should be spending it on building barriers."