KUALA LUMPUR • These are turbulent times for "Superman", as Mr Hew Kuan Yau is often called.

The Malaysian firebrand activist famous for his coarse oratory and left-leaning views was last Thursday called in for the third time by the police to be questioned about his controversial comic book.

Mr Hew was not wearing his trademark Superman T-shirt, and seemed rather sober as he stopped to speak to reporters. He told the media that he had been on a fast since Tuesday so that he can better reflect on what has happened.

It has been a crash landing for Mr Hew, who was a superstar on the campaign stage of the Democratic Action Party (DAP) during the general election and who had been flying high since then.

But his comic book has had very few people amused. Instead, it left a number of ministers red-faced, riled up communal feelings and has put DAP in a tight spot.

The book, published earlier this year, was a decidedly pro-Beijing look at China's policies, including its handling of the issue of the country's minority Muslim Uighur community, plus a highly partisan sprinkling of Malaysia's politics.

The book also carried a foreword by Mr Lim Guan Eng in his capacity as Finance Minister and DAP secretary-general.

However, all that might have passed without much fanfare had Mr Hew not used his DAP connections in the Education Ministry to distribute the Bahasa Malaysia version of the book to more than 2,000 schools.

A photograph of Mr Hew and Deputy Education Minister Teo Nie Ching posing with copies of the book has been circulating through cyberspace.

It was what some have described as a "big blunder" to try and disseminate political literature in Malaysia's schools. Some even linked it to spreading China's communist ideas in schools.

But it was not until Bossku, that is, former premier Najib Razak highlighted it on his Facebook page that everything blew up.

That was when the government realised that the comic book was one of the "mementos" Prime Minister Mahathir Mohamad had presented to Chinese President Xi Jinping when they met in April.

Leaders of the ruling Pakatan Harapan (PH) often try to ignore what Najib says on Facebook, but they could not ignore this one and there was an immediate scramble to do damage control.

The Education Ministry withdrew the book from schools, the Prime Minister's Office distanced itself from it, and the Home Ministry ordered an investigation.

Mr Hew initially tried to defend the publication but he could sense the enormity of the issue and deactivated his Facebook page last Tuesday. On Thursday, he resigned as chief executive officer of the Malaysia-China Business Council because his position was no longer tenable.

The appointment had been widely seen as a reward for his role in the general election campaign but the comic book issue has now called into question his sense of judgment and understanding of government and power.

"He is supposed to be the bridge between Malaysia and China but the issue has affected his credibility as the representative for Malaysia," said a Penang lawyer.

Mr Hew's appointment to the council had raised eyebrows, because he got into trouble and had to resign from the DAP a few years ago for declaring that the South China Sea belongs to China.

The future of the state-funded Asia Comic Culture Museum in Penang, of which Mr Hew is CEO, is also in the balance.

Mr Hew is known as an ideologue. He is also some sort of Chinese influencer - his Facebook account had some 400,000 followers - and top DAP leaders try not to offend him for fear of being attacked by him. 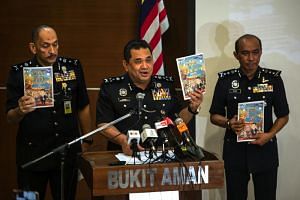 The comic book fiasco could not have happened at a worse time for PH - race tensions are at their worst in years, while relations between DAP and Tun Dr Mahathir's Parti Pribumi Bersatu Malaysia have deteriorated to the point where politicians openly criticise each other's party.

There has been a deafening silence on the part of top DAP leaders, leaving the impression that Mr Hew has been hung out to dry.

"DAP used him to campaign from coast to coast in the general election. He helped DAP to win big, but now they are giving him the cold treatment. It is ethically wrong for DAP to disown him like this," said former DAP parliamentarian Jeff Ooi.

Only a few leaders of the DAP youth wing have come forward to lend Mr Hew moral support.

Mr Hew told the Chinese vernacular press: "Some (leaders) send their best wishes, some cut off from me. It has made me learn more about human nature and see everything more clearly."

He also borrowed a saying from the Han Dynasty, alluding to a sword dance where the sword is pointed at one man but is actually meant for another.

The thing about politics is that people tend to remember the bad rather than the good things, and Mr Hew's reputation for using vile language at political rallies has returned to haunt him at his most vulnerable moment.

Some in the DAP disapprove of his style and had frowned on what they saw as "showing off" on his social media postings.

"Everything he does, he uploads on Facebook - from trips to China to sightseeing and even when somebody sponsors a TV set for his office," said a DAP politician from Selangor.

Mr Ooi, meanwhile, senses some power play with the DAP smack in the centre of it all.

"The claim that the book was banned because it promotes communism has far-reaching consequences. I have a feeling that the issue is far from over," said Mr Ooi.