BANDAR SERI BEGAWAN • All passengers and crew of a Royal Brunei Airlines flight where a power bank reportedly exploded were unharmed, the Brunei national carrier said in a statement.

The incident became public after a Facebook user showed videos and images of the incident that were quickly shared by others.

The videos and images showed a smoky main cabin and passengers covering their noses and faces as flight attendants calmly extinguished what was believed to be a small fire.

The airline, in a statement on its website, referred to what occurred on board as "a power bank incident".

In his post, Facebook user Francis Ngu Hown Hua praised the crew members for their professionalism and composure in handling the situation.

Flight BI636 was flying from Hong Kong to Bandar Seri Begawan, and landed at its destination safely as scheduled last Thursday.

"Our cabin crew are trained to follow standard operating procedures to handle such incidents professionally and to ensure the safety of our guests at all times. We carry the recommended safety equipment on board at all times," said the airlines in a statement that day. 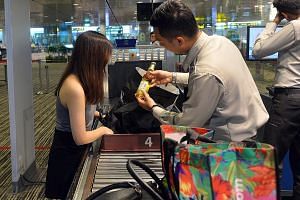 Watch what you pack before boarding flight

The airline highlighted the importance of the safety of its guests.

It issued a reminder for passengers to observe the Guide to Dangerous Goods for checked-in or carry-on baggage in accordance with the International Air Transport Association's Dangerous Goods Regulations.

It was not clear if the incident was caused by a passenger charging or using the power bank.