Indonesian police have foiled another ISIS-inspired terror attack in Jakarta, stopping a suicide bombing by a 27-year-old woman who allegedly planned to strike yesterday morning at the presidential palace.

The woman was arrested at a lodging house in Bekasi, West Java, on Saturday afternoon with a home-made "rice cooker" bomb.

The 3kg improvised explosive device had been brought to her earlier by two male militants.

The police said it contained explosives more powerful than military-grade TNT and had a blast radius of about 300m. It seemed similar to the pressure-cooker bombs used in the 2013 Boston Marathon bombings, which killed three people and injured at least 260 others.

The police did not name the suspects and referred only to the woman's initials, DYN, but a confidential source named her as Dian Yuli Novi, from Cirebon, West Java.

She is said to be the first woman in Indonesia to plan to commit a suicide bombing.

This is a new (terrorist) cell and they had learnt to make bombs from Bahrun Naim using the Telegram messaging (smartphone) application.

COLONEL AWI SETIYONO, on how cell members received bomb assembly instructions from the Indonesian militant now with ISIS in the Middle East.

Dian, the two men who delivered the bomb and another man who made the device were nabbed in consecutive raids by the Detachment 88 (Densus 88) counter-terrorism unit, carried out across West and Central Java on Saturday.

A manhunt is now on for two more members of the group, Jakarta police spokesman Awi Setiyono told reporters yesterday.

"This is a new (terrorist) cell and they had learnt to make bombs from Bahrun Naim using the Telegram messaging (smartphone) application," said Colonel Awi.

Bahrun Naim is an Indonesian militant who is in the Middle East fighting alongside the Islamic State in Iraq and Syria (ISIS).

This is the second arrest in as many weeks by Densus 88 in Indonesia, a majority-Muslim nation that went on high alert for terrorist activity even before the Jan 14 terror attack in downtown Jakarta.

The Bekasi cell's target was believed to be Istana Merdeka, a building in the palace compound where President Joko Widodo receives visiting heads of state and holds meetings with his Cabinet. 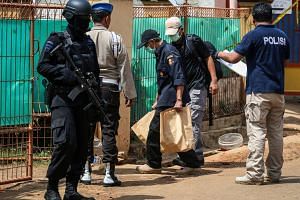 Jakarta police spokesman Raden Prabowo Argo Yuwono said in The Jakarta Post yesterday that the plan was to detonate the bomb at yesterday's changing of the guard ceremony, set to take place in front of Istana Merdeka.

According to the report, members of the public are allowed to observe the ceremony every second Sunday of the month. It starts at 8am local time and usually attracts a sizeable crowd.

Col Awi said the suspect who assembled the bomb was arrested in Karanganyar, Central Java, at about 6pm on Saturday, but not before he had handed the bomb to two other suspects, identified only as MNS and AS, in Solo, Central Java.

"MNS and AS have been under surveillance by Densus 88 since they were in Solo," he added. "They rented a car and drove to East Jakarta to hand over the bomb to DYN."

When the two met DYN, they took her to a local post office where she sent a parcel. Col Awi said Densus 88 intercepted her package without the suspects knowing, and discovered she had sent a farewell letter to her parents.

MNS and AS were arrested on an overpass at Kalimalang, in East Jakarta, on Saturday at 3.40pm. Ten minutes later, DYN was arrested in a room at the lodging house located in Bintara Jaya, Bekasi, during a subsequent raid by Densus 88 officers.

The wife of one of the two men was also arrested in Solo yesterday, as investigations continued.