On the sidelines of the Asean Summit in Singapore, Mr Pence piled the pressure on Myanmar's de facto leader, calling for an explanation of the jailing of two Reuters journalists over their coverage of the crisis.

Ms Suu Kyi has seen her reputation as a rights defender hit by her refusal to speak up for the Rohingya, a stateless group reviled in the Buddhist-majority country.

She had an Amnesty International honour revoked this week and faced sharp words from Malaysian Prime Minister Mahathir Mohamad at the meeting of South-east Asian nations.

"Someone who has been detained before should know the sufferings and should not inflict it on the hapless," Dr Mahathir told reporters on Tuesday, in a reference to Ms Suu Kyi's long years of house arrest under Myanmar's military junta.

"But it would seem that Aung San Suu Kyi is trying to defend what is indefensible," he added.

Mr Pence, in direct remarks as he sat next to Ms Suu Kyi, condemned the "violence and persecution" against the Rohingya as "without excuse".

Then, in a challenge to Myanmar's civilian leader, Mr Pence said he was "anxious to hear about the progress" being made to hold the perpetrators accountable. 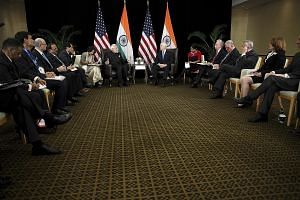 A crackdown led by Myanmar's army last year sparked an exodus of the Muslim minority into neighbouring Bangladesh, taking with them accounts of rape, murder and arson. United Nations investigators say the army's actions amounted to genocide.

Today, a long-delayed and heavily criticised plan to repatriate the Rohingya was set to begin, despite dire warnings that their safety will be in jeopardy if forced to return to Myanmar.

The process has had several false starts before.

Myanmar does not want the Rohingya, who are officially described as "Bengali" illegal immigrants. The Rohingya do not want to go back without security guarantees and citizenship.

But the fetid and overcrowded refugee camps in Bangladesh offer a bleak future for the more than one million Rohingya who have fled successive waves of violence in Myanmar.

The Rohingya crisis has decimated Myanmar's reputation among large sections of an international community which helped to shape its transition from outright military rule.

Ms Suu Kyi has no power over the army, which retains autonomy over all security matters, but she has come under fire for not doing more to speak out against the generals' excesses.

She has also been criticised for her failure to speak up for two Reuters reporters jailed for seven years for breaching the colonial-era Official Secrets Act after reporting on the extrajudicial killing of 10 Rohingya men in a military crackdown last year.

The sentence sparked global outcry as an assault on the freedom of speech.

"In a way, we can say we understand our country better than any other country does," she said.

"They were not jailed because they were journalists", but because "the court has decided that they had broken the Official Secrets Act", she had said in September.

Ms Suu Kyi's civilian government had the power to drop the charges.