To be credible, Anwar must get own house in order: Observer

Parti Keadilan Rakyat (PKR) heads into its first congress since becoming the mainstay of Malaysia's new government under a cloud, after leadership polls that saw an array of irregularities and claims of fraud.

Although reformist icon Anwar Ibrahim was uncontested as president of the party he founded two decades ago, a faction allied to him that accused incumbent deputy president Azmin Ali of a coup was soundly defeated after voting ended last weekend.

The onus is on 71-year-old Datuk Seri Anwar to repair the party after a divisive two-month-long contest, especially with doubts over if and when he will become premier under a transition deal agreed by the ruling Pakatan Harapan (PH) coalition.

The former deputy premier's party triggered a by-election last month so he could return to Parliament, but critics say the move was unnecessary since the handover is not expected until 2020. Others, especially those from Prime Minister Mahathir Mohamad's party, are calling for the 93-year-old PM to stay on until the next general election.

"Uniting PKR and getting the party ready will be the major test for Anwar," said public affairs consultancy KRA's strategy director Amir Fareed Rahim. "If he fails to do that, he will have a credibility gap. If he can't get his own house in order, his ability to govern will be in doubt."

But as the youth and women's wings opened their assemblies on Thursday night, the election committee refused to confirm provisional results showing a thumping win for those aligned with Economic Affairs Minister Azmin, a favoured "adopted son" of Tun Dr Mahathir. The committee now says the new leadership line-up will be revealed only during the congress this weekend.

Once a trusted lieutenant to Mr Anwar, but now poised as a future PM in his own right, Datuk Seri Azmin fended off a stiff challenge from outgoing vice-president Rafizi Ramli whose allies are poised to win one of four vice-president spots and five of 20 central committee seats. 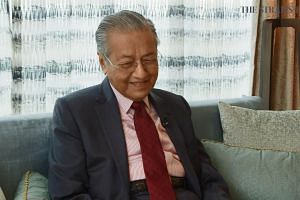 However, Mr Rafizi's protege Akmal Nasir won the youth leadership in controversial circumstances as final counts gave him a 66-vote win hours before the end of the youth assembly yesterday evening, having trailed by over 800 votes last week.

Analysts say Mr Anwar must at the very least accept that his party - the largest in government with 50 out of PH's 127 MPs - wants him to work with his former aide and not obstruct the latter's rise. "I will join arms with our new president Datuk Seri Anwar Ibrahim," Mr Azmin, 54, said when officiating at the wings' meetings.

Risk consultancy Eurasia Group's Asia director Peter Mumford said: "Azmin's people are now in key positions and if Anwar does not work with them, they may slow, or add uncertainty, to the latter's ascension."

Violence, bribery allegations, voting discrepancies and disruption to the electronic voting system plagued the process over eight weekends. But the body blow to PKR's credibility was a sudden hike from 600 to nearly 14,000 members in the Julau division, Sarawak. The number - which spiked in one day in June - was over half the voter roll at the May 9 general election.

Party leaders aligned to Mr Azmin cried foul, saying the 13,178 new members were registered to just 11 addresses and over half were unreachable. Some 1,310 who did answer calls denied joining PKR.

The election committee said it would not hold a revote for Julau, sparking protest from Mr Rafizi's camp, who claimed he would have gained 3,000 votes - narrowing Mr Azmin's lead to less than 1 per cent - if not for a "cyber attack" which saw balloting suspended. The suspension was due to Mr Rafizi's complaints that malware had erased voting data. But the alleged application, Prey, is an anti-theft program that tracks and secures devices and its makers have denied its software can selectively delete information.