In the editorial, the paper says that a major challenge during the Tokyo 2020 Olympics will be taking measures against heat.

TOKYO (THE YOMIURI SHIMBUN/ASIA NEWS NETWORK) - This year's Tokyo Olympics and Paralympics marks the Summer Games' return to the nation for the first time in 56 years.

The sports extravaganza is set to add a new page to Japanese history, once more.

On New Year's Day, the Emperor's Cup soccer final took place at the new National Stadium and the University Rugby Football Championship final was held there on Saturday (Jan 11).

The stadium, which can accommodate 60,000 people, was almost filled to capacity. How to effectively steward spectators and other such matters were confirmed in preparation for the Games.

21 accommodation buildings, the tallest of which is 18 stories, have been completed at the Olympic Village in Tokyo's Harumi area, where 18,000 athletes, among others, will be staying.

Passages in common areas have been made 30 centimetres wider than the average width in standard condominiums, making it possible for athletes in wheelchairs to pass each other comfortably.

There is also no uneven flooring on which canes used by the visually impaired may get caught.

Paralympic athletes will be able to use these facilities without anxiety. It is important to realise the Games' principle of seeking to promote inclusion in society.

The Olympic torch relay, which starts in March, will feature torchbearers chosen by Tokyo and each of the nation's prefectures with some connection to the areas in which they will participate.

Kenji Kimihara, the silver medalist in the marathon at the Mexico Olympics, will run in the Sukagawa, Fukushima Prefecture, leg of the relay.

Sukagawa is the birthplace of Kokichi Tsuburaya, the bronze medallist in the marathon at the 1964 Tokyo Olympics who was close friends with Kimihara. 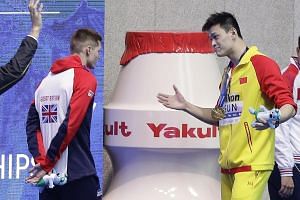 No place for protests at Tokyo 2020

Although Kimihara lives in Kitakyushu, he applied to the Fukushima prefectural government to be a torchbearer, offering to run in the relay to honor Tsuburaya, who committed suicide before the Mexico Games.

Kimihara will turn 79 this year. The sight of Kimihara running with the Olympic torch in his hand should offer some encouragement to people in areas struck by the Great East Japan Earthquake.

High school students in various parts of the country are also getting involved in the Games.

Agricultural high schools in towns that will host foreign athletes are planning to serve them dishes made with locally produced ingredients.

Students at Gifu Senior High School of Agriculture and Forestry in Gifu Prefecture will prepare kamameshi rice, a dish made in small pots, using the rice they harvested and ayu sweetfish, a local speciality.

At Tokyo Metropolitan Kogei High School, students are producing the clubs that will be used in the Paralympic club throw event as part of their classwork, using wood lathes to whittle beechwood into bowling pin-like implements.

All of the clubs will be completed by March, after which they will be delivered to the Tokyo Organising Committee of the Olympic and Paralympic Games.

When the clubs are used in the throwing events, it will be an achievement that will be felt for a lifetime by the students.

Such efforts will surely help the whole of Japan generate greater momentum as we approach the Games.

A major challenge during the Games will be taking measures against heat.

Although there will be sunshade tents where water, ice and cool-air fans will be provided, it will be difficult to completely prevent heatstroke.

It should be made widely known among volunteers and spectators at the Games that they should take whatever measures they can to keep cool, paying particular attention to their necks, underarms and waists.

It is also important to contemplate policies in advance to deal with typhoons and torrential rain disasters.

As the accuracy of weather forecasts has improved in recent years, there has been an increase in such cases as planned suspension of train services announced in advance by railway operators.

Anticipated in these cases are changes in event schedules or even holding games or matches without spectators present.

Possible measures must be worked out for each event.

Transportation is another crucial area. Should a surge in public transportation use by Games spectators from overseas occur simultaneously with a surge in commuters, the transit system may likely be thrown into disarray.

Companies should recommend that their employees work at home or take summer vacations as much as possible during the Games, thus cooperating to mitigate packed trains and congested roads.

That Russia has been banned from taking part in international sporting events for four years by the World Anti-Doping Agency has also caused repercussions to the Tokyo Games.

It is reasonable for the sporting world to strictly deal with the code-violating country to prevent drugs from contaminating sports.

Japan, as a host country, must make full preparations for inspections.

Daiya Seto, who has been tentatively selected to represent Japan in swimming events, started his training early in the New Year holidays, on Jan 3.

The final of the 400-meter individual medley, Seto's forte, is scheduled for just two days after the Opening Ceremony. With an eye on that event, he made a confident and inspiring declaration: "By winning the gold medal, I will create a good current for the Japanese team."

In badminton, a sport in which Japan stands proudly at the world's top level, three pairs have been competing ferociously to grab one of the two places to represent the Japanese team in women's doubles.

Each of the three pairs are athletes who are promising enough to ascend the winners' podium.

We hope they will work hard together to the very end and enter the Games in their best condition.

A new national training facility was opened last autumn in Kita Ward, Tokyo. Its floors can withstand even the impact of wheelchair competitions. Para-athletes will be able to train there without hesitation.

At a sports ground in Maebashi, four track and field athletes from the African nation of South Sudan have been adding the clicking sounds of their spikes to the cold wind.

As there are no training facilities available in their country because of a civil war, the city of Maebashi offered its support to them. After arriving in Japan last autumn, they have been receiving instruction from a Japanese coach.

In the morning, they go to a Japanese language school, and they sometimes visit a local elementary school to have lunch or clean classrooms together with students.

Such interactions will become memorable events as good as the competitions watched by spectators during the Games.