Regional leaders continue to call for calm; analysts worry it could just be a lull

After the fiery war of words between North Korea and the United States last week, the world is breathing a little easier as the two sides dialled their rhetoric down by a notch this week.

Stock markets rallied for the second day running yesterday after North Korean leader Kim Jong Un was reported to have said that he will watch the US for "a little more" before launching a missile strike on the US territory of Guam.

Senior US officials have also downplayed the threat of an imminent military conflict, with top US general Joseph Dunford stressing diplomacy and sanctions over war in a meeting in Seoul with South Korean President Moon Jae In on Monday.

Other countries continued to appeal for calm. Mr Moon has vowed to "avoid war at all costs", while Chinese Foreign Ministry spokesman Hua Chunying urged for cool heads to prevail. China yesterday cut off imports of iron, iron ore and seafood from the North, on top of a halt of coal imports from February.

The region has been on edge since the North said last week that a plan would be ready by mid-August to fire a volley of four missiles into waters around Guam. Its warning came after US President Donald Trump threatened to unleash "fire and fury like the world has never seen" on the North, which launched two intercontinental ballistic missiles successfully last month. 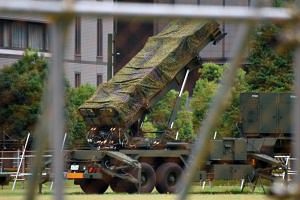 Japanese Prime Minister Shinzo Abe and Mr Trump yesterday reaffirmed in a call that it was imperative for the global community to halt Pyongyang from conducting further ballistic missile launches.

On the same day, both Koreas marked the 72nd year of liberation from imperial Japanese rule. Pyongyang has tended to time its missile launches with key dates, and talk of a launch had been rife.

Mr Moon yesterday reiterated his commitment to a peaceful resolution, saying military action against the North should be "decided by ourselves and not by anybody else".

On Monday, Mr Kim inspected the command of the army and examined a plan to fire four missiles towards Guam, reported the official Korean Central News Agency. He said "they would watch a little more the foolish and stupid conduct of the Yankees", it reported yesterday.

US Defence Secretary James Mattis and Secretary of State Rex Tillerson stressed in the Wall Street Journal on Sunday that the US strategy was a "peaceful pressure campaign".

While playing down the threat of war, US officials stressed they were prepared for any attack from North Korea. Mr Mattis said on Monday that it would be "game on" if missiles were to strike Guam. "If they fire at the US, it could escalate into war very quickly," he said.

Analysts who spoke to The Straits Times were hesitant to call the latest developments a cooling of tensions. Dr Go Myong Hyun of the Asan Institute for Policy Studies in Seoul said a potential trigger for Pyongyang was the large-scale joint military drills by Seoul and Washington that will start next Monday.

Security expert Tosh Minohara of Japan's Kobe University said it is still a "dangerous game of chicken", warning that this could just be the calm before the storm.

A version of this article appeared in the print edition of The Straits Times on August 16, 2017, with the headline 'North Korea and US dial down war of words'. Subscribe
Topics:
More
Whatsapp Linkedin FB Messenger Telegram Reddit WeChat Pinterest Print Purchase Article Copy permalink