WASHINGTON • United States President Donald Trump said he will not meet Chinese President Xi Jinping before a March 1 deadline to avert higher American tariffs on Chinese goods, intensifying fears the two will not strike a deal before the end of a 90-day truce.

Mr Trump responded "no" and shook his head on Thursday when reporters at the White House asked him if he would meet Mr Xi this month.

Then he added: "Unlikely."

But the US President said the two would "maybe" meet later.

Mr Trump told reporters last month that he planned to meet Mr Xi late this month, saying there was a "good chance" of striking a deal.

Time is running out for the US and China to reach an agreement before the deadline the Trump administration has set to more than double tariffs on US$200 billion (S$271 billion) of Chinese goods.

While the US has said it is a hard deadline for the tariffs, Mr Trump has also suggested he could agree to extend negotiations beyond the month's end if progress is made. 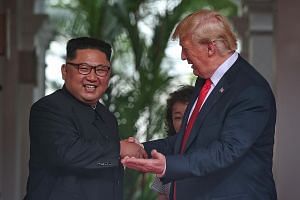 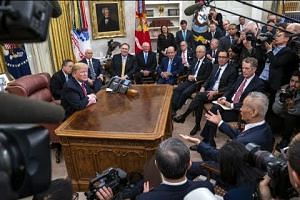 US Trade Representative Robert Lighthizer and Treasury Secretary Steven Mnuchin are leading a group of officials headed to Beijing next week as part of the trade talks.

Mr Lighthizer told reporters last week that it was not certain a deal could be reached. Asian stocks tumbled yesterday on worries the US and China will not reach an agreement.

One senior official said the decision not to go ahead with a meeting should not be read as a sign the talks were breaking down. Rather, it was due to the amount of work that still needed to be done by negotiators. The two leaders could also speak by phone, the official said.

There is growing concern among officials that Mr Trump could agree to a cosmetic deal that would not address core issues like China's alleged intellectual property theft, according to a person familiar with the talks.

But the President and other senior officials have publicly and privately stated the negotiations are going well and that the two sides are continuing to bridge their differences at every round of talks.

In a meeting at the White House on Wednesday, Mr Trump's trade team discussed the next steps for the trade talks, according to a person briefed on the matter.

Mr Lighthizer and Mr Mnuchin do not have a mandate to bring back a draft deal from their Beijing trip, the person said.

The President is headed to Asia to meet North Korean leader Kim Jong Un in Vietnam on Feb 27 and 28.

A delay in the meeting between Mr Trump and Mr Xi is not a deal breaker, said Mr Derek Scissors, a China expert at the American Enterprise Institute.

"When it was agreed that they would meet, it was known at the time that it would be hard to match schedules before March 2," Mr Scissors said. "By itself, a delay until after March 2 is not a threat to the chances of a deal."

A version of this article appeared in the print edition of The Straits Times on February 09, 2019, with the headline 'No meeting with China's Xi before tariff deadline'. Subscribe
Topics:
More
Whatsapp Linkedin FB Messenger Telegram Reddit WeChat Pinterest Print Purchase Article Copy permalink