PETALING JAYA • The Malaysian government has not made any decision regarding the East Coast Rail Link (ECRL) project, said Prime Minister Mahathir Mohamad yesterday night, in an apparent flip-flop days after other senior officials indicated that the project had been scrapped.

"At this moment, no final decision has been made. Some decisions were made but we have to find a better solution.

He added: "We feel that we should give time to both sides (Malaysia and China) to come up with a solution to this. There may be other options - we are open."

Dr Mahathir also said his administration is still studying the costs involved in the multibillion-dollar project. "Apparently, there are offers by others which will cost less. The previous government gave a very high estimate on ECRL," he told reporters yesterday evening.

However, work on the 688km railway line - which is expected to link the east and west coasts of Peninsular Malaysia - has been suspended since last July after the Pakatan Harapan government took office following its electoral victory last May, promising to review the country's large-scale infrastructure projects. 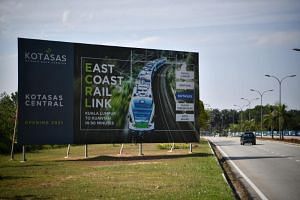 The Straits Times reported last week that the government had cancelled the original contract with the state-owned China Communications Construction Company (CCCC). The government is said to be seeking to halve the estimated project cost to RM40 billion.

Earlier yesterday, Dr Mahathir said Malaysia would be "impoverished" if the government proceeds with the project.

"We are burdened with heavy debts. We seek understanding from all parties. We will be impoverished by the project if we go on," he told reporters after launching the National Anti-Corruption Plan.

"The huge compensation for cancelling it is not as huge as the amount we have to carry for the next 30 years," he said.

"It is not because we want to frustrate or throw out the contract; it is because we are really tight in terms of finance," said Dr Mahathir.