The dramatic escalation of the row followed the expulsion of the North Korean ambassador to Malaysia, which was matched by Pyongyang's own declaration that Malaysia's already recalled envoy was persona non grata.

The heated spat was caused by the Feb 13 murder of Mr Kim Jong Nam, the half-brother of North Korean leader Kim Jong Un.

Prime Minister Najib said in a statement that he had instructed police to prevent North Koreans from leaving Malaysia "until we are assured of the safety and security of all Malaysians in North Korea".

Yesterday, he chaired an emergency meeting of Malaysia's National Security Council that includes the police, army and immigration chiefs.

"This abhorrent act, effectively holding our citizens hostage, is in total disregard of all international law and diplomatic norms," Datuk Seri Najib said. 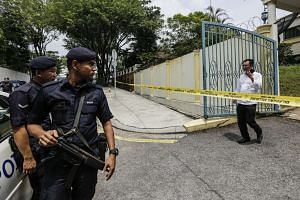 On the flip side, at least 180 North Koreans, and possibly hundreds more, are stuck in Malaysia.

North Korea's Foreign Ministry said the move to bar Malaysians from leaving would be in effect until "the safety of the diplomats and citizens of the DPRK in Malaysia is fully guaranteed through the fair settlement of the case that occurred in Malaysia", according to state organ Korean Central News Agency.

Pyongyang rejects claims by South Korea and the United States that it ordered Mr Kim's execution, insisting that the dead man is not related to North Korea's leader.

It instead accused Malaysia of dishonest investigations and conspiring with North Korea's enemies, an outburst which resulted in Kuala Lumpur expelling Pyongyang's ambassador Kang Chol, after he failed to apologise. North Korea reciprocated on Sunday but Kuala Lumpur's ambassador had already been recalled two weeks ago.

Malaysia has arrested four suspects over the killing. Two women - Indonesian Siti Aisyah, 25, and Vietnamese Doan Thi Huong, 28 - were charged with killing Mr Kim, who died on the way to hospital after the duo allegedly smeared his face with a liquid in the Kuala Lumpur International Airport before he was to board a flight to Macau.

One North Korean suspect was deported last Friday after investigators failed to obtain sufficient evidence to charge him during a two-week remand, while four other North Korean suspects are believed to have escaped on the same day of the attack, and are now in Pyongyang.

Inspector-General of Police Khalid Abu Bakar said yesterday that he believed three other North Koreans - including a senior diplomat - wanted for questioning over Mr Kim's death are inside the North Korean Embassy, preventing police from taking their statements.

"We will wait, if it takes five years, we will wait outside. Definitely somebody will come out," the police chief told reporters.