NEW YORK • North Korea has sold fishing rights to Chinese fishery operators in violation of United Nations sanctions on Pyongyang, according to an upcoming annual report by a UN Security Council expert panel.

North Korea has used the sale of fishing rights as an important means of acquiring foreign currency, the report says. In some cases, Chinese fishing boats flew the North's national flag in an attempt to disguise themselves.

The panel is tasked with monitoring the implementation of UN sanctions against the North. Every March, it publishes a report that calls attention to the North's bid to skirt sanctions.

The panel's previous reports have found North Korea violated sanctions in its exports of coal, imports of refined petroleum and assistance to Syria, a nation suspected of chemical arms use.

From January to November last year, more than 15 Chinese fishing ships operating in the Sea of Japan/East Sea, the East China Sea and elsewhere were confirmed to possess North Korean fishing licences, according to information in the report provided by two UN member states.

Through testimony obtained from Chinese fishery operators, the panel learnt that about 200 Chinese fishing boats are operating in waters around North Korea, and that fishing licences are sold for about 810,000 yen (S$10,023) per month.

The testimony has also shed light on the practice of Chinese fishery operators purchasing licences through intermediaries. Some Chinese vessels carried the North Korean national flag in an attempt to pass themselves off as ships from the North.

North Korea is said to have begun selling fishing rights several years ago. 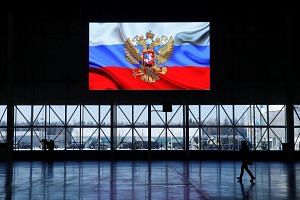 In August 2017, the Security Council adopted a resolution imposing a total ban on North Korean exports of marine products, stating the sale of fishing rights was a measure to obtain foreign currency. Another resolution adopted that December confirmed the sale of fishing rights falls under exports of marine products, making clear such sales are the target of sanctions.

In response to an inquiry about Chinese fishing boats holding North Korean fishing rights, the Chinese government told the panel that it quickly issued the required notice after the council adopted the resolution to ban the sale of fishing rights, according to the report.

Meanwhile, South Korea's National Intelligence Service reported to the legislature in 2016 that the North had sold fishing rights to about 1,500 Chinese fishing boats that year, a three-fold increase from the average year, adding that the country had earned about US$30 million (S$40.4 million) from the sales.

The Japanese government is also aware of the situation. In a speech before a ministerial-level meeting of the UN Security Council last September, Foreign Minister Taro Kono cited the sale of fishing rights as an example of cunning attempts by the North to evade UN sanctions.