JAKARTA • Residents in Jakarta may be excited about trial runs of the Indonesian capital's new MRT system, but they have been less enthusiastic about videos on rider etiquette published by the operator, MRT Jakarta, on social media.

Those who talk loudly to their friends, gobble up snacks, sneak peeks at other passengers' mobile phones, snore, and put on make-up while commuting are said to be exhibiting poor behaviour.

Those who do not perform these acts are held up as examples of "good" passengers.

While talking loudly, eating and peeking are undoubtedly disturbing, some netizens have argued that snoring and putting on make-up could still be considered acceptable behaviour.

Snoring may even be beyond the control of the sleeping passenger, they pointed out, though it could be eliminated by sleeping with one's head bent down or by wearing a mask.

Meanwhile, the woman putting on make-up in the video is being overly demonstrative, shaking her make-up brush in the direction of the passenger beside her. An average passenger is unlikely to act that way on a train. 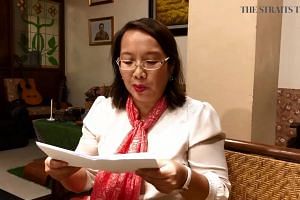 ST Scroll Back: Playing music at MRT stations - is it a sound idea?

Unsafe to sew on train

Many women discreetly put on lipstick and face powder on public transportation, actions that often go unnoticed and can be considered acceptable.

The video has garnered hundreds of comments, including some that criticise the rules prohibiting snoring and putting on make-up.

Many netizens recommended that the MRT operator focus on the most basic commuter etiquette, such as waiting until all exiting passengers leave the train before boarding, giving up seats for the elderly, pregnant women and those with young children, as well as not littering.

Mr Kamal Muhamad Kamaluddin, acting head of corporate strategy and planning at MRT Jakarta, told The Jakarta Post that the video was made according to the conduct benchmarks set by urban subway systems in other countries.

"We will keep updating our video and its contents... The one already posted is an appeal (for the public to be considerate towards other passengers)," said Mr Kamal.

Regarding the backlash, Mr Kamal said that MRT Jakarta would come up with updated videos that are more acceptable to the public.